The compactly designed 850 Series engine from Perkins provides a 40% increase in power and 60% more torque. 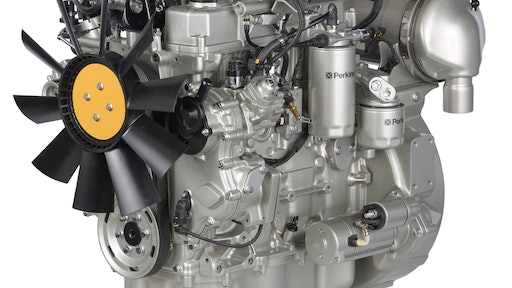 There are a whole host of applications in construction, materials handling and agriculture where this engine can really get to work.

Although it’s compact, the 850 Series is big on performance, big on torque and big on usability. With a huge 40% increase in power and up to 60% more torque available, the engine range gives great operating characteristics throughout the duty cycle. In the field or on site, operators will appreciate the engine response and the ease at which it can get through the work.

The benefit for OEMs is that this 3.4 liter unit can do the work of a 4.5 liter engine. With the trend for downsizing machines, the increased power density and fuel economy of the 850 Series allows equipment manufacturers to select this engine where previously they may have used an engine of higher cubic capacity. This frees up valuable space to package the aftertreatment unit, which in the case of the 850 Series can be mounted in a variety of locations for additional flexibility.

Because of the break at 56 kW (75 hp) in the emissions legislation, each engine runs a different type of aftertreatment but in each case, both packages are optimized to the engine, giving excellent fuel economy, and no interruption to the running of the machine.

The 850 Series is an engine that gets to grips with the challenges facing equipment manufacturers. As they look to build small, high performance yet cost effective machines then the 850 Series is the new workhorse they are looking for.