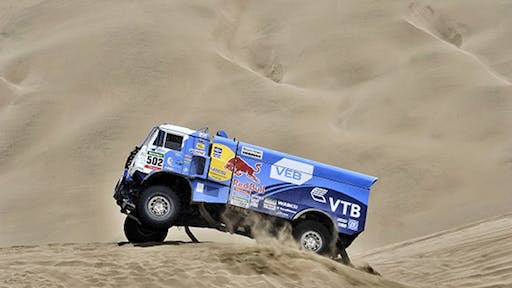 This year's Dakar Rally was a great success for the Kamaz Master truck racing team. Aside from occupying the whole of the podium, the Russian team also secured fifth place. The Kamaz team came first in the Africa Eco Race too, which took place at the same time. All trucks are equipped with powerful V8 diesel engines from Liebherr, which have once again proved their worth in tough desert use.

Torrid heat, dusty air and a challenging route across the Andes and the world’s largest salt lake: The Dakar Rally through Argentina, Bolivia and Chile exposes drivers and vehicles to the most extreme conditions. The Kamaz Master truck racing team took to the start this year with four trucks – each of which was fitted with an 8-cylinder D9508 A7 diesel engine from Liebherr. Way ahead of the competition, the team led by driver Ayrat Mardeev was the first to cross the finish line after 44:42:01 hours. The driver colleagues Eduard Nikolaev and Andrey Karginov followed with their team members in second and third place.

The decision by Liebherr partner Kamaz – a Russian manufacturer of trucks and other vehicles – to install Liebherr engines was based on their trust in the well-developed and reliable technology. Wladimir Guba, Technical Director of the Kamaz racing team, says, “Success in racing depends not only on the performance of the engine but the probability of failure and repair times. Here, we place trust in the engines from Liebherr that have proven their worth in similar extreme conditions, above all in mining.”

To engineer the components to be even more reliable and, at the same time, dynamic for special conditions, Liebherr worked closely with Kamaz to specifically further develop the drive system for the Rally 2015. In the race configuration, changes were made above all to the charge air system to achieve higher charging pressures. The consequence is optimal combustion of the injected fuel quantities whose volume has likewise been increased. Remarkably, no modifications were made to supporting structures of the engine, such as the crankcase and engine mounting. These have already been engineered sufficiently in the standard version. Even the lubrication system was adopted completely without change since the Liebherr V8 engine is generally designed to work up to 45 degrees.

The engines, which are built at Liebherr Machines Bulle SA in Switzerland, are distinguished by a maximum output of 770 kW (1,047 hp) and a highest possible torque of 4,500 Nm. The engines accelerate within 10 seconds from 0 to 100 km/h – and they achieve this despite a dry weight of about 1,400 kg in the racing version. The engine with common rail injection system from Liebherr has a displacement of 16.2 liters and thereby conforms to the rally regulations which, from 2016, limit displacement to 16.5 liters. The 8,900 kg trucks reach a top racing speed of 140 km/h.

Kamaz consciously opted for diesel engines from Liebherr: The powerful technology also impressed during the Africa Eco Race through Morocco, Mauritius and Senegal, which took place at the same time. With his Kamaz Master truck equipped with a Liebherr V8 engine, Anton Shibalov also came first in Dakar.