During INTERMAT 2015, Hyundai will display a wide array of equipment for use in various applications that are designed to meet Tier 4/Stage IV emissions regulations. 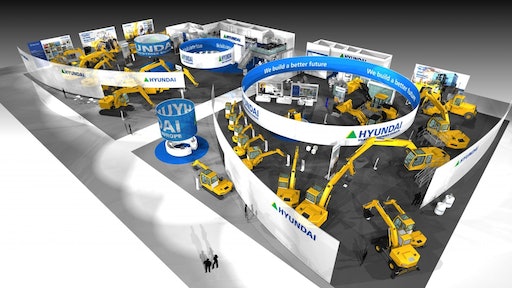 The showcase lineup includes the world debut of excavators and wheel loaders which answer customers’ needs and environmental requirements.

The most significant change introduces diesel engines compliant with Tier 4/Stage Ⅳ standards to reduce exhaust emissions and to improve fuel economy. The wide range of updates cover cabs featuring a dashboard and an instrument cluster, hydraulic control and exterior design.
HHI will showcase a total of 27 construction equipment machines and two forklift models on its booth in hall 5B. The impressive machine list can be found at the end of this release.

Mini/Midi Excavators
Among eight mini/midi excavators ranging in the operating weight from 1.6 up to 8.0 tons, the fully remodeled R17Z 9A will be launched in the first quarter of 2015 and the R25Z 9A is newly fitted with a more powerful Kubota Engine.

Heavy Line Excavators
Hyundai has changed the heavy line excavators into HX Series by introducing Tier 4/Stage IV compliant machines. All-new HX Series ranging from the HX220L (22 tons) to the HX520L (52 tons) will be easy to identify and recognize by their new design.

Wheeled Excavators
Hyundai is proud to introduce the all-new R160W-9A, which will expand the market coverage for Hyundai dealers around Europe, especially in France.

Hyundai Booth at INTERMAT 2015
At INTERMAT 2015, HHI will highlight the results of its on-going investment towards global leadership.

The Hyundai stand will feature the new machine series, a merchandising shop, an excavator simulator, a photo booth, an operator’s café and daily entertainment.

For Hyundai customers, several hospitality areas are equipped at the stand.

Visitors are welcome at the Hyundai booth in hall 5B. Staff members from Hyundai headquarters in South Korea, HHI Europe and the French Hyundai dealers are looking forward to meeting visitors.

Jung Jun-cheol, new Managing Director of HHI Europe, says, “Market conditions continue to be tough for everyone, but Hyundai believes that it is important to demonstrate not only its latest products and innovations but also its continued commitment and support to all customers and dealers.”

Machines HHI will display at INTERMAT 2015 include: