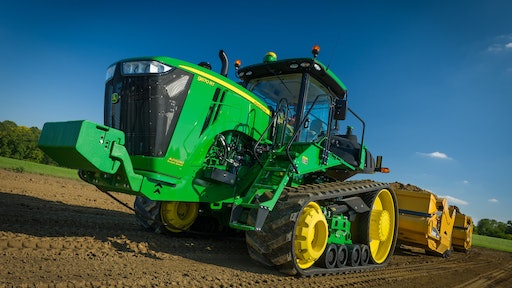 John Deere is enhancing its 9R/9RT Scraper Special Series Tractor lineup and adding its largest model to date, the 9620R. The four wheel models and three tracked models vaunt increases in horsepower, feature the fuel saving Efficiency Manager and the exclusive HydraCushion suspension system, as well as boast industry-leading hydraulic flow – all in an effort to increase productivity, uptime and lower operating costs in earthmoving applications.

“We’re committed to delivering more power and options than ever in our most versatile lineup to date. Seven John Deere R Series Scraper Special Tractors paired with the new D Series scrapers give earthmovers a system designed and built to manage any jobsite,” says David Wilson, Product Marketing Manager, Scraper Systems, John Deere Construction & Forestry. “Having the broadest line of scraper tractors in the industry means our customers can take advantage of larger scrapers which move more material with faster cycle times. The more material they move each pass, the more it drives down their cost of operation.”

The updated scraper tractors continue to utilize the most impactful feature of the 9R tractors, Efficiency Manager. This advanced feature automatically adjusts and matches the performance of the engine and transmission to maintain ground speed with the lowest RPMs to dramatically reduce operator fuel consumption.

A HydraCushion suspension is a John Deere exclusive available on all 9R Series wheeled scraper tractors and offers contractors the ability to virtually eliminate road lope associated with high transport speeds typically seen on haul roads. By eliminating the lope from the ride, both loaded and empty cycle times can increase, thus adding directly to the bottom line. To further enhance ride quality and stability in high-speed transport where these tractors typically operate, all 9R wheeled scraper tractors have a 17-inch increase in their wheelbase.

To accommodate higher horsepower and larger loads, the 9R tractors’ front frame strength was increased by 10% and the rear frame assembly strength by 30%. To further support the loads of larger scrapers and reduce axle loading, the short drawbar support is now standard equipment on all scraper special tractors, with the long support still being available on wheel tractors.

The tractors are also equipped with John Deere’s exclusive AutoLoad system. This feature makes it push-button easy to consistently load the scraper in minimal time with minimal effort. AutoLoad controls the scraper’s hydraulic-lift functions during the load cycle by automatically adjusting the blade height until the pan is full, then disengages through normal operation. The system allows novice and experienced operators to be more consistent and productive while operating John Deere tractors and scrapers.

To improve the uptime experience, John Deere added critical fuel capacity to provide longer runtime. With operators running double shifts or longer days in order to meet minimum production requirements, fuel tank capacity was increased to 400 gallons on all wheeled scraper special tractors, allowing the tractors to run longer without the need to stop and refuel in the middle of a shift.

Auto differential lock was added to the 9R Series and provides automatic traction throughout the entire jobsite. By engaging the auto diff lock from the command arm, the operator no longer has to worry about engaging and disengaging the diff lock. The system keeps the differential lock engaged as long as the tractor is straight. This feature not only increases performance in tough conditions to allow the tractor to pull through soft areas, but it also aids in reducing tire wear.

Inside the cab, Active Command Steering was added for greater high-speed control and improved low-speed maneuverability. By controlling the steering inputs electronically it reduces the fatigue on the operator and keeps the tractor headed straight down the haul road with minimal correction.

Operators looking to get the most out of their scraper tractors can rely on Ultimate Uptime featuring John Deere WorkSight. With Ultimate Uptime, operators receive pre-delivery and follow-up inspections; three years of JDLink telematics, machine heath prognostics, and remote diagnostics and programming capability; and the ability to add additional dealer-provided uptime solutions to customize the package to individual needs.