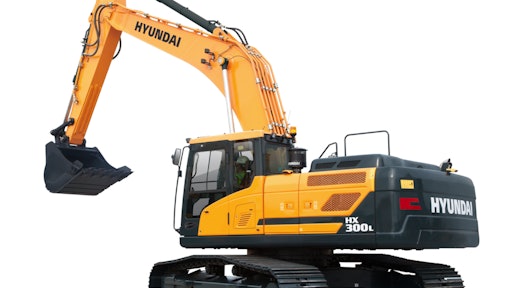 INTERMAT 2015 saw the debut of the new HX300 L crawler excavator which is the latest, most powerful and most ergonomic range of equipment Hyundai has ever introduced. A bold statement maybe – but Hyundai reports that the brand new HX excavator range has been designed from scratch – making the South Korean manufacturer confident that the new excavator will take the market by storm.

The new range of excavators has been given a new model name to distinguish them from their predecessors. The new generation will start with the letters ‘HX’ – Hyundai tracked excavator. The following three digits (as before) represent the operating weight in tonnes x 10. For example – the HX300 L model weighs in at 30 tonnes.

The HX Series of excavators are manufactured in Hyundai’s Ulsan factory in South Korea and the HX300 L is fitted with the very latest 171 kW Cummins engine which complies with the latest emission standards Stage IV for the reduction of particles and Nox in exhaust gasses. Hyundai has chosen a combined and proven solution with EGR and SCR technology. This results in a reduction of fuel consumption of 3 to 6% - depending on the type of operation.

With the new engine technology, the side vent openings have been made bigger to ensure better air flow to the engine. The rear working lights have also been repositioned for a better view which is safer for the operator. A new machine guard has been installed and the air filters are now more accessible for maintenance.

The cabin has also been re-designed – a new larger front screen has been incorporated and the driver's door is now easier to open from the inside with an additional handrail. The interior of the HX-cab offers 10% more space for the operator. A newly developed air conditioning system provides better air circulation in the cab.

One of the most important innovations on the new HX Series is the new and larger 8-inch touchscreen monitor – which can be operated when wearing gloves. It’s also easy to read and the main view of the screen can be adjusted according to the preferences of the driver. It can be controlled via touch control and/or new haptic control switch, which is common in passenger cars. The connection to a mobile phone is easier than ever, as is the connection with external cameras for complete 360-degree visibility thanks to the AAVM (Advanced Around View Monitoring) camera system.

Four different arms are available for the HX300 L as well as a long reach boom and arm combination for earthmoving, digging and loading tasks. Hyundai says that the HX300 L is also a perfect tool carrier for heavy demolition equipment.

The first HX models are available at Intermat. By the end of 2015, the HX series ranging from 12.5 to 90 t will be available for European customers.