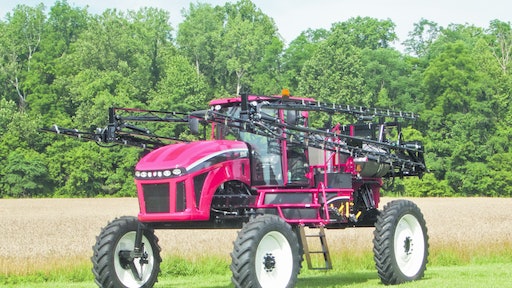 Press the ignition button on a 2016 Apache self-propelled sprayer and don’t be surprised if it feels like an experience at a thoroughbred horse farm.

All four Apache models boast greater horsepower in the new model year, while consuming less fuel and providing a steadier ride than previous models. Other improvements include a sturdier and easier to maintain boom rack, a redesigned and repositioned product tank sight gauge, and a cab that’s even quieter than before. Apaches continue to be lighter and more affordable than competing sprayers, extremely reliable and backed by an industry-leading five-year limited warranty.

Visitors to the Farm Progress Show were able to learn more about Apache at the Apache Sprayers booth, at lot 27W in the show site’s Southwest Quadrant. The show runs through Thursday (September 3).

“Our 2016 models raise the bar for quality and value,” says Matt Hays, Chief Executive Officer of Equipment Technologies, the Apache manufacturer. “We believe growers will like what we’ve done and will enjoy greater cost savings and profitability with these new machines.”

The upgrades begin under the hood, where the new 30 Series Apaches receive more get-up-and-go. The Tier 4 Final Cummins diesel engines generate higher horsepower while stretching fuel further than their 20 Series predecessors. Here is a model comparison:

The 30 Series models are 5 to 20% more fuel efficient than previous Apaches, which already were energy misers.

In back, 2016 Apaches are equipped with straddle mount rear axles. The new axles promote smooth gear shifting and contribute to a more stable ride.

Keeping track of how much chemical is still in the product tank is a snap, thanks to an easier-to-read sight gauge. The gauge is relocated to allow greater visibility from inside the cab.

Speaking of the cab, less noise will be heard inside. New models have been re-engineered to be as much as 6% quieter than older models, again making Apache the low-noise champion. The ergonomically friendly seat and control console provides ultimate comfort to operators, along with such features as a joystick with Braille-type dimples and bumps for control by feel, rearview camera, “Plug and Play” ISOBUS technology, two cruise control settings, a USB jack, a Bluetooth-ready Polk audio system with four Jensen HP speakers and 360-degree visibility. An optional vented and heated leather seat also is available.

Apaches are the only sprayers with optional factory-installed Raven and Trimble precision application systems.

A simple but powerful torque-converted mechanical drive transmission allows Apaches to handle even the toughest and steepest terrain. Patented Power-to-the-Ground technology transfers 90% of an Apache’s horsepower to the ground, making it more efficient than competing hydrostatic sprayers. And weighing 3,000 to 14,000 lbs. lighter than other sprayers, Apaches create less soil compaction.

Apaches are priced tens of thousands of dollars less than John Deere and Case IH sprayers of comparable size and options. What’s more, new Apaches come with an industry-leading five-year warranty that is unrivaled.

“We believe so strongly in our sprayers we’re willing to back them with a warranty that is second to none,” Hays says. “We challenge growers to find a sprayer that beats Apache in price, cost of operation, ease of use, durability and return on investment.”