The facility started as an assembly plant for two product lines and has continually expanded in size and scope over the past decade. 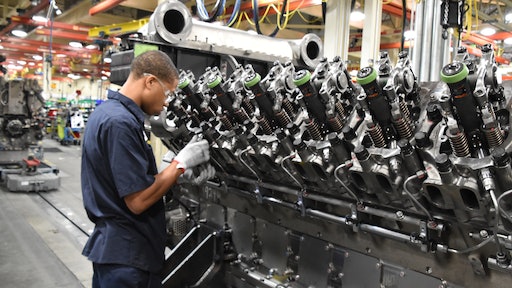 Rolls-Royce’s MTU Aiken manufacturing facility is celebrating its 10-year anniversary – looking back with pride at past achievements and looking ahead with anticipation of opportunities still to come. The 395,000 sq.-ft. campus, which produces off-highway MTU-brand diesel engines, opened in the fall of 2010 when the company decided to move its manufacturing operations from Detroit, MI, to Graniteville, Aiken County, SC. What started off as an assembly plant for two product lines has continually expanded in size and scope over the past decade to become much more.

“The original goal of the Aiken plant was to carve out our own space where we could take greater control over our destiny and our manufacturing here in the U.S.,” said Joerg Klisch, Director of Operations at the MTU Aiken plant. “Everything that we’ve been able to achieve here over the past 10 years reflects the positive culture and spirit of innovation that we have. We have continually challenged ourselves to take on the next program or develop the next competency, all with a focus on developing our people and our community along the way.”

The facility began with the assembly of MTU Series 2000 and Series 4000 diesel engines, which together cover a power range from 760-4,000 hp and are used in a variety of off-highway applications in the construction, industrial, power generation, mining and oil & gas markets. After its official opening in December 2010, where the focus was solely on getting assembly operations up and running, the plant brought machining operations online soon after, allowing the facility to machine its own components on-site.

Investment in Research and Development

Investments at the facility over the years have resulted in the addition of the plant’s Research & Development Center, featuring test cells capable of conducting sophisticated emissions calibration and certification testing, and an Administration Building where supplier quality, purchasing and scheduling for the facility are located. The plant has also grown to incorporate military propulsion systems, assembling and conducting complete overhauls of MTU Series 883 engines and power packs used in military applications. The next capability to be added, which is currently in the works, is remanufacturing and overhaul of engines for customers in the Americas.

Beyond manufacturing and operations, the past decade has also resulted in the award-winning MTU Aiken Youth Apprenticeship Program, which has been nationally recognized for its unique approach to bridging the manufacturing skills gap in the U.S. It positively promotes careers in manufacturing and represents an investment in Aiken Country’s education system. The program — which combines classroom instruction, hands-on training at a local career center, and on-the-job training at the plant — is designed to provide high school students with the opportunity to obtain industrial manufacturing work skills and earn a wage, while they learn. To date, 32 high school students have successfully completed the program to graduate high school with a diploma and a certificate in industrial mechanics.

An additional achievement was the completion of a $1.9 million solar panel field in 2017 that allowed the MTU Aiken plant to generate a different kind of power – solar power – to feed into the local utility grid. With a peak output of 1 megawatt, the solar panel field, consisting of more than 4,200 panels and covering approximately seven acres located next to the MTU Aiken plant, feeds directly into the local power grid and can generate enough clean energy on sunny days to power 500 homes.

The Aiken facility employs 265 people and represents a $100 million investment by Rolls-Royce. It will continue to play a significant role in the company’s transformation from an engine provider to a sustainable solutions provider. Before the end of this year, the facility is scheduled to bring its microgrid solution online, which will initially be used to provide power to its administration building. The future case for the microgrid will be to work alongside the utility grid to offset peak energy demand for the entire facility. In addition to benefiting the plant, it will serve as a demonstration opportunity for customers, allowing them to see how microgrids operate and how they can result in reduced energy costs.

“Looking ahead to the future, the Aiken facility aims to broaden its scope to deliver technologies to power de-carbonized energy sources, such as for combining solar, wind power and energy storage capabilities into microgrids and more,” said Klisch. “Our ongoing strategy is always to further diversify our business.”