Since beginning the manufacture of engine vibration dampers in Huntington, Indiana, in mid-2018, the Bendix Commercial Vehicle Systems team there has now produced 1 million units. 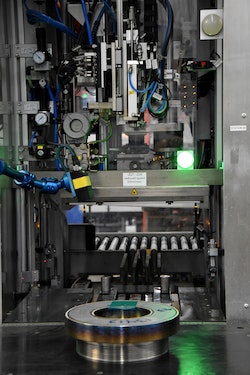 Since beginning the manufacture of engine vibration dampers in Huntington, Ind., in mid-2018, the Bendix Commercial Vehicle Systems team there has now produced 1 million units.
Bendix

From the ones inside the passenger vehicles to those powering freighters across oceans, internal combustion engines of all sizes depend on vibration dampers to improve fuel consumption, extend component life and protect against operational stresses.

Since beginning the manufacture of engine vibration dampers in Huntington, Ind., in mid-2018, the Bendix Commercial Vehicle Systems team there has now produced 1 million units, each engineered specifically for a range of customer engines keeping North America moving and continuing a growth pattern that will lead to a new production line later this year.

“It’s truly astounding what this hardworking and dedicated team has accomplished in such a short period of time, and I want to personally thank each and every person who made it happen,” said Ryan Moreau, KPS manager at Bendix’s Huntington operation. “It’s phenomenal the way they’ve mastered every step, from working with the engine manufacturers to get the specs just right to mastering the different methods we’ve set up to build multiple parts quickly and efficiently across each of the production lines.” Moreau led the team responsible for transitioning damper production from the former Bendix production facility in North Aurora, Illinois, to its new home in Huntington.

Engine vibration dampers are used to reduce torsional vibration on engine crankshafts to prevent shaft failure and reduce noise. They also play a role in improved fuel economy and drivability while protecting mounts and other components exposed to repeated stress while an engine is running. Bendix, the North American leader in the development and manufacture of active safety, air management, and braking system technologies for commercial vehicles, has been operating in Huntington since February 1980.

Bendix vibration dampers can be found on engines in almost all major North American commercial vehicles, as well as off-highway equipment in the construction, agricultural, and marine industries.

“Just like with engines themselves, there’s no one-size-fits-all when it comes to vibration dampers,” said Jay Urban, product group director for engine dampers at Bendix. “What works for the larger pickup trucks isn’t a solution that you just scale up for something that’s going on a Class 8 truck or one of those ship engines that’s the size of a small house. Bendix works closely with each customer to learn their engine needs and performance parameters to come up with the right damper design for the application, and then conduct unequaled in-house simulation and testing before beginning production.”

As demand for vibration dampers grew, Bendix consolidated its damper production lines in Huntington – advantageous for its central location to many manufacturing customers – and expanded its footprint in Indiana.

That growth will continue in the fourth quarter of 2022 with the completion of a new production line, reflecting a $10 million investment in the facility.

“There’s no greater illustration of the confidence Bendix has in this team and this community than the commitment to keep building and expanding on our 40-year-plus legacy of quality in Huntington,” Moreau said. “I have no doubt that everyone here will embrace the opportunity to keep making these important contributions to North America’s commercial vehicle industry.”

Bendix’s Huntington complex has achieved a series of milestones in growth, performance, corporate responsibility, and sustainability in the years since it opened in 1980. Initially established as a 30-worker manufacturing and distribution center, the location now employs over 500 people across multiple plants.

In 2019, the company acquired a new location for expansion and realignment of its operations, bringing the complex to 855,000 square feet across four buildings. In addition to engine vibration dampers, manufacturing operations at the site now include air compressor and brake shoe remanufacturing, electronics assembly, and manufacturing of integrated modules. Additionally, the site is home to Bendix’s primary North American distribution center.