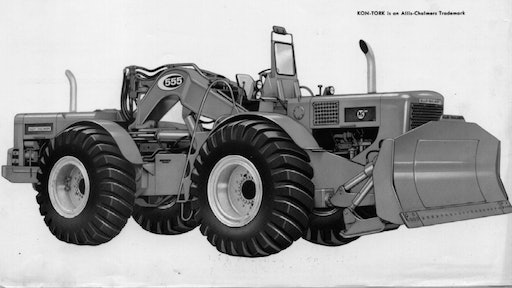 With the double-jointed articulation typical of this design, the Allis-Chalmers 555 push tractor had a turning radius of roughly half its length. It was offered only in 1962 and 1963.
Allis-Chalmers spec sheet, 1963, HCEA Archives

In the last issue, we took a look at how and why the rubber-tired dozer evolved. One of the major applications of these machines was pushloading scrapers, so let’s look at the wheel tractors built specifically for that service.

We saw how rubber-tired tractors had superior mobility and speed compared to crawler tractors. One of the goals of a pushloading operation was to get the pushloading tractor into position for a new pass quickly and safely, and the wheel tractor had the advantage over crawlers in this regard.

The application of the wheel tractor to pushloading took three distinctive routes. One was the use of a conventional wheel dozer. The most powerful wheel dozers of the late 1950s through mid-1960s, such as the Michigan 380 and 480, and Hough D400 and D500, were often used as pushers, while having the flexibility to undertake other dozing tasks as well.

Another was to use two-axle tractors that were normally used to pull scrapers. This was not a common practice, but in at least one case four or five of these tractors were ganged up in pushloading a single scraper. Their processing back into position for another push must have been quite a sight.

The third approach was to design rubber-tired tractors designed specifically for pushloading.

The other type was built by combining two modified single-axle prime movers into a single machine by yoking them in-line, with all controls on the lead unit. LeTourneau’s Tournatwos, built from 1951 through 1953, were the first, and were continued by LeTourneau-Westinghouse as their Twin C Pusher. The Twin C was offered only into the late 1950s, but the concept hit its zenith in the early 1960s.

Cat dealer Peterson Tractor Company had assembled two or three compactors on special order using paired 631A and 631B prime movers, and one 631A set was converted to a pushloader by replacing the tamper wheels with tires. Allis-Chalmers built a few 731 hp (545 kW), 75-ton 555 tractors, the last tandem prime movers to be commercially offered. Impressive as they were to look at, the 555s were commercial and mechanical failures, but they helped introduce another engineering concept for construction machinery that we’ll look into next time. |

Tractor Registrations Down in First 6 Months of 2020

The patented design eliminates interference with the burr created by the setscrew through use of axial grooves at setscrew locations that run the length of the inner ring.
Regal Beloit Corporation
September 17, 2020

Polygon collaborated with K-Tec Earthmovers to develop bushings featuring liners that eliminate the need for greasing or other regular maintenance.
Polygon Company
September 17, 2020

The company will demonstrate the ability for battery-electric trucks to successfully transport goods in daily routes as part of the Volvo LIGHTS project.
Volvo Trucks North America
September 16, 2020

Cummins will use the funding to develop H2Rescue, a hydrogen fuel cell truck that will travel to disaster relief sites and provide power, heat, and water.
September 16, 2020

Mack Trucks to Begin Production of LR Electric in 2021

"The Problem Solvers Caucus COVID-19 stimulus framework is a pragmatic blueprint for how negotiators can get back to the table and bring immediate relief to American workers and families."
Association of Equipment Manufacturers (AEM)
September 15, 2020

The Smart Factory @ Wichita will demonstrate how Industry 4.0 can make an impact to spur innovation and enable smart factory capabilities.
September 15, 2020

The promotions of the new vice presidents are effective October 1.
Cummins Inc.
September 15, 2020

Use of various sensor technologies will be necessary to meet the safety functions described by the new ANSI 92.20 standard.
Sara Jensen
September 14, 2020
Follow Us