As modern infrastructure demand grows in the late 1800s, trenchers emerge to dig out the trenches and basements of its development. 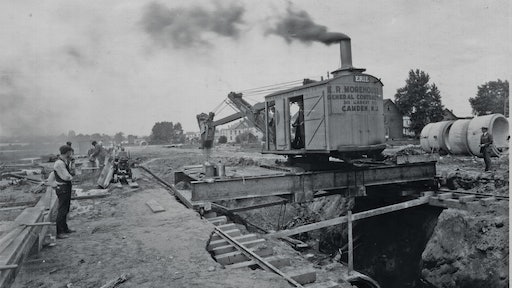 The Erie B was one of several models of steam shovels that could be modified for trench work. Note the spreader bar and shoring used to support the rails.

As development of modern infrastructure began in earnest in the late 1800s and early 1900s, the need grew for large-scale, mechanized excavation of trenches and basements. Two primary means of doing this emerged: The purpose-built trencher, which was first developed in 1893 by the founders of the Buckeye Traction Ditcher Co., and adaptations of steam-powered cable excavators.

Each type of steam excavator had its own particular application, but none were designed to dig trenches. A clamshell crane could dig down, but not along a line; the bucket was lowered, penetrated the surface to grab its load, and was lifted straight back up again.

The dragline, which was invented in 1903, could dig below the surface in a line towards the machine by pulling the bucket along the ground; but the line and plane of travel could not be precisely controlled, and the digging depth diminished with distance from the draw works. Moreover, because the bucket were suspended from the excavator’s boom, neither the dragline nor the clamshell could exert any appreciable down pressure beyond that provided by gravity, momentum, leverage and the design of the bucket’s cutting edge.

Shovels could dig in a line, but only away from the machine with most of the force applied in an upward direction and a very limited range below the surface. But, by modifying shovels in various ways, they could be turned into effective trench excavators.

The most common modification was to use a significantly elongated dipper stick that enabled the shovel to dig to the required depth. The problem with the design was that--as with a conventional shovel--the dipper still faced forward and had to dig away from the machine. Consequently, the machine had to straddle the open trench on timbers or rails, leading to spectacularly unsafe working conditions. Some machines used a reversed dipper to dig towards the machine like a backhoe, but these were the exception.

It’s interesting to note that the use of shovels for trench excavation took hold after the introduction of the first precursor to the backhoe. Look for next month’s Off-Highway Heroes to learn why as we look at the backhoe machine.

The Historical Construction Equipment Assn. (HCEA) is a 501(c)3 non-profit organization dedicated to preserving the history of the construction, dredging and surface mining equipment industries.With over 4,000 members in 25 countries, activities include publication of a quarterly educational magazine, Equipment Echoes; operation of the National Construction Equipment Museum and archives in Bowling Green, OH; and hosting an annual working exhibition of restored construction equipment. Individual memberships are $30.00 within the USA and Canada, and $40.00 US elsewhere. HCEA seeks to develop relationships in the equipment manufacturing industry, and offers a college scholarship for engineering students. Information is available at www.hcea.net, by calling 419-352-5616 or e-mailing info@hcea.net.