Intrigued by a special vehicle request not yet available in the existing market, a company develops the first cranes designed specifically for mounting on trucks. 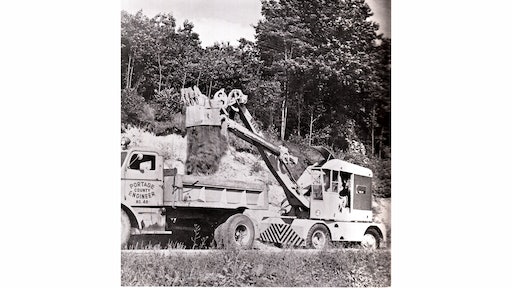 The John F. Byers Machine Co. Traveler was an example of self-propelled shovels built in the 1940s. Self-propelled and truck-mounted excavators were popular for highway and road departments because of their mobility.

During World War I, the American Expeditionary Force (AEF) requested 125 cranes mounted on motor trucks in order to both expedite the handling of cargo on the docks of France and enable the cranes to move quickly from job to job. At that time, no manufacturer offered motor truck-mounted cranes. Instead, The Thew Automatic Shovel Co. filled the order with 65 gasoline-powered cranes mounted on traction wheels. The AEF’s idea intrigued Thew president F. A. Smythe, and he spearheaded the development of the first crane designed specifically for truck mounting. The first truck crane was built in 1918, and the concept gained quick market acceptance.

The success of the truck crane led to the next logical step in excavator development. Excavators had been available on steel traction wheels for several years, but traction wheel-mounted excavators had little advantage in off-site mobility over crawler-mounted excavators. Like their crawler-mounted counterparts, they had to be moved by trailer or flat car, or else at the plodding speed of a crawler excavator but with the advantage of being less harsh on road surfaces.

In 1922, Luke E. Smith addressed this problem by mounting the upper works of a military surplus power shovel on a used truck. The result was America’s first excavator that could move from job to job on its own at highway speeds, modest though they were. Smith’s prototype underwent extensive testing, and in 1929 Smith founded the Quick-Way Truck Shovel Co. in Denver, CO, to manufacture his machines. The company was successful and went on to produce cranes as well as crawler-mounted excavators, and it remained in business until acquired by Marion Power Shovel Co. in 1961.

Vern Schield of Waverly, IA, expanded on the idea in 1941 when he mounted a home-built dragline on a surplus International truck. Schield’s design, the Bantam, succeeded to the point that he built some three dozen draglines before the Schield Bantam Co. was incorporated in 1946. Bantam achieved even more success than Quickway, and it was acquired by Koehring Co. as a division in 1963. Koehring continued the Bantam name for the former Bantam line of hydraulic cranes and excavators for many years afterward.

Many other manufacturers of crawler cable excavators also offered truck mountings, on conventional over-the-road trucks, or on purpose-built carriers either furnished by firms such as F. W. D or Crane Carrier Co. or designed and built in house. Many also offered excavators on self-propelled, rubber-tired carriers; these were similar in principle to the old traction wheel excavators, but could move at suitable speeds for city streets.

Along with shovels and draglines, backhoes were also offered, but the capacity of truck-mounted and self-propelled excavators was limited by the properties of their carriers. They simply could not offer the size and stability of footprint that a larger crawler machine’s lower works could provide. While truck crane capacity during the time these excavators were offered reached 100 tons or more, the capacity of the largest truck crane that could be equipped as an excavator was typically 30 to 35 tons capacity; such a crane could be equipped as an excavator of roughly a cubic yard. Larger truck-mounted and self-propelled excavators were rare; smaller machines of 1/2 or 3/4 cubic yard capacity were far more numerous.

As hydraulic excavators rendered cable-operated excavators obsolete in the 1960s and 1970s, so too were the truck-mounted and self-propelled cable excavators phased out of the market.

The John F. Byers machine Company Traveler was an example of self-propelled shovels built in the 1940s. Self-propelled and truck-mounted excavators were popular for highway and road departments because of their mobility. (Byers brochure 1248, 1948)