The 2016 edition of EIMA saw a 21% increase in attendees from all over the world, including large business delegations from South America and Africa. 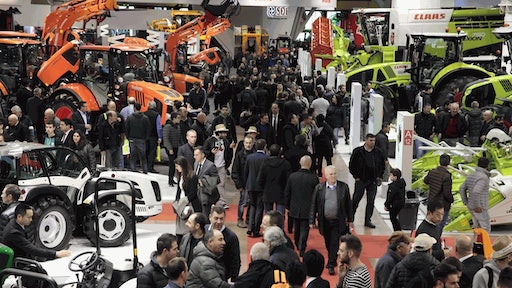 EIMA International, the review of agricultural mechanics which just came to a close in the Bologna Trade Fair Center, was a huge success with a record number of visitors in attendance. Over the 5 days of the exposition, their numbers swelled to 285,000 for a 21% increase over the figure reported for the most recent edition in 2014, plus more than 44,000 business people for an 18% gain.

The review organized by FederUnacoma, the Italian Federation of Agricultural Machinery Manufacturers, generated an enormous number of business contacts while offering crowds of visitors vast ranges of technologies achieved by the 1,900 exhibiting industries in the trade fair pavilions. EIMA International was also a festival for the agriculture and engine sectors with an important impact on the media and social media fronts. Hundreds of journalists from all parts of the world reported live on the events scheduled and the great general public could follow trade fair developments on EIMA Web TV. The outlet broadcast more than 40 services, eight live which were streamed. More than 75,000 people were reached by Facebook which featured 500,000 contacts for sharing the posts.

The EIMA Image Line Social Team - Agronotizie/FederUnacoma produced more than 1,000 multimedia stories to make it possible to experience the event on the web in future months.

But above all, the 2016 EIMA International was geared to the delegations of business people from 80 countries abroad, 70 of which were organized by FederUnacoma in collaboration with ICE, the Ministry for Economic Development trade agency. The ICE-FederUnacoma initiative alone led to some 15,000 visits to the stands of the exhibiting manufacturers and 3,000 business-to-business meetings set up by business people in the delegations. These arrivals came mainly from South America, North Africa and the Sub-Saharan area, the Middle East, Southeast Asia, ex-Soviet Union republics, the Balkans and Oceania. Attending EIMA for the first time were delegates from Jordan, Kenya, Mozambique and Palestine while Argentina, Brazil, Chile and Perù were the countries sending the largest official delegations. Beyond those arriving officially, more than 40,000 business people came as independents from 140 countries. The interests of the Italians and foreigners attending ranged over all the sectors represented in the exposition, from tractors to components, irrigation and gardening and on to bioenergy featured in the Energy area managed by ITABIA, the Italian Biomass Association, for disseminating information on wise practices with technologies for exploiting agricultural residues and production wastes as renewable energy resources.

Among the many other successful initiatives was the EIMA Desk, organized in cooperation with UNACMA, the Association of Italian Agricultural Machinery Dealers, for furthering green issues. FederUnacoma President Massimo Goldoni declared, “This edition closes a glorious cycle for EIMA International furnished with the present Bologna trade fair quarters structures. We are looking to a future in which the exposition will change its face thanks to ongoing interventions planned by BolognaFiere for restructuring these quarters. Quarters in transformation to better welcome the review with a peak world standing in the sector which covers industries and business people as no other.”