CEMA reports order intakes for European agricultural machinery remains strong, but will not further increase; 84% of manufacturers expect turnover to grow in 2018. 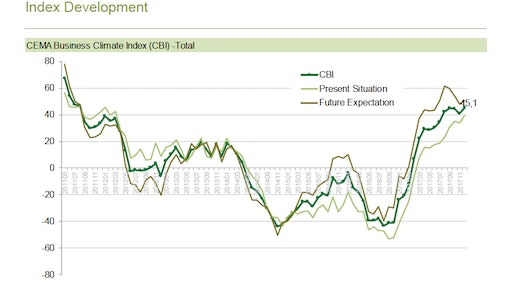 The general business climate index of the agricultural machinery industry in Europe remains at a high level. Evaluation of current business has further improved, while future expectations are no longer as high as in the last months. Order intake remains strong, but will not further increase. In total, the forecasts remain bullish: 84% of manufacturers are still expecting their total turnover to grow in 2018 (versus 94% in September).

The breakdown by segment shows that the business climate for tractors has recovered after the slump in the previous month, but both future and current business expectations are still well below the industry average. Within the arable equipment segment, turnover expectations have slipped below the current business evaluation, which may signal a market reversal. The manufacturers of livestock equipment seem, meanwhile, still little worried about any prospects of lower milk prices.

The regional breakdown shows once again for each single European market a majority of survey participants expecting turnover increases in the next 6 months. Poland scored by far the best rating, as it is in the midst of a strong upswing. Germany and France are now also in the upper part of the country ranking, however, if considering only tractors, arable and harvesting equipment, they are rather midfield (especially France). Drought-hit Spain once again ends up at the bottom. On a global level, the highest growth potential is seen in Central and South Asia, followed by Oceania.