CEMA reports the arable equipment market saw a volume increase of 10% in 2017, and expects gains to continue through at least the first 6 months of 2018. 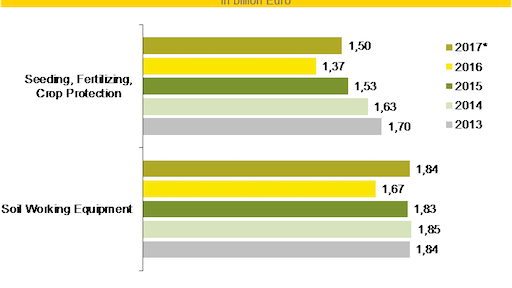 In 2017, European arable equipment markets recovered from the slump of the previous year and developed positively. The downward trend of the preceding 4 years ended particularly for seeding, fertilizing and plant protection equipment. Following a weak trend in 2016, the soil working equipment segment again attained the level of the previous 3 years. According to preliminary calculations, the 2017 market volume amounted to approximately €3.34 billion, thus achieving a 10% increase in comparison to the previous year. Thanks to well-filled order books, a further upward trend is expected for the current year, at least for the first 6 months.

“It continues to be the Eastern European region that exhibits a high demand for soil working equipment, as well as seed drills, fertilizer spreaders and plant protection equipment. At the European level, the growing markets in Romania and Ukraine and, not least, the market recovery in Poland, compensated for the continuing weak market in France,” states Nina Janßen, Coordinator of the three CEMA Product Groups which, at the invitation of the Sulky-Burel company, met in March at Chateaubourg in Brittany, France. The companies Köckerling and Kerner were welcomed as new group members for the areas of soil working equipment and seed drills. Attending his first Product Group sessions, new CEMA Secretary General Jérôme Bandry said, “I welcome this opportunity to become more familiar with the markets for arable equipment and assess key trends with its participants on the basis of dedicated statistics and within a strict compliance framework.”

According to schedule, there were new elections in two groups. Ms. Elke Pankow (Rauch Landmaschinenfabrik GmbH, Germany) is the new Chair for Seeding and Fertilizing Equipment, and Mr. Peter Henrik Dahl (Hardi International A/S, Denmark) is the new Chair for the Plant Protection Equipment group. They succeed Massimo Bergo (Maschio Gaspardo S.p.A., Italy), who after two terms could no longer be re-elected, and Christoph von Stark (Horsch Maschinen GmbH, Germany). Jérôme Bandry thanked the two departing chairmen for their great commitment and the positive development of the product groups. In the group for Soil Working Equipment, the incumbent Chair, Mattias Hovnert (Väderstad AB, Sweden) was unanimously re-elected for a second term.

Digital farming holds great potential for the sector. Elke Pankow anticipates that future development of the market will be focused less on increased equipment size, working widths and volumes. Instead, she sees an enormous potential for innovation and efficiency, through the use of electronic and digital solutions for environmentally compatible, efficient application. Peter Henrik Dahl likewise regards the technologies involved in digital farming as the most important aspect for the future of the sector. Mattias Hovnert sees this trend particularly for the growing Eastern European market, where for structural reasons larger machines are sold than in Western or Central Europe.

The CEMA Product Groups are composed of leading European manufacturers of tractors, combine harvesters, and equipment for arable farming and for the harvesting of forage and hay. The primary emphasis is on a shared assessment of the market, based on CEMA’s own statistics. Currently 24 companies from nine European countries are members of the CEMA Product Groups in the area of arable farming. A prerequisite for participation is membership in a national industry association that belongs to the CEMA umbrella organisation.