Italy in Decline for Tractors in First Five Months

Data on registrations point to a 3.6% decrease in tractors compared to the same period in 2017 and drops for other types of machinery. 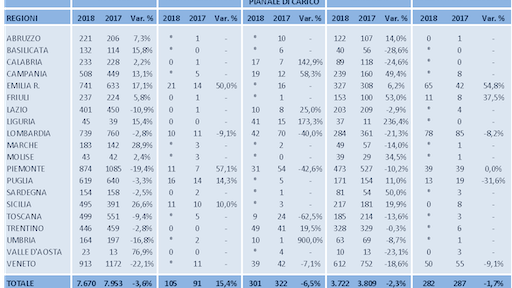 Data on registrations point to a 3.6% decrease in tractors compared to the same period in 2017 and drops for other types of machinery. The continuation of winter weather led to delays in crop operations which slowed the demand for machinery. Beyond this particular trend the domestic market remained weak due to the reduced ability of farmers to invest in machinery. Worries about the ongoing increase of sales in the market of second-hand machinery.

The peak of tractor registrations featured in 2017 owing to the need of manufacturers to speed up sales of their inventories or register machinery in warehouses ahead of the application of the European Union of the Mother Regulation created a sort of anomaly wave in the trend of the statistics in the sector. Following the surge of registrations which boosted sales by 23.8% for the year with repercussions in January 2018, the Italian market returned to a negative phase in the months of March, April and May. As calculated by FederUnacoma using Ministry of Transport figures on the first five months, tractors declined by 3.6% compared to the same period in 2017 with 7,620 units sold; transporters dropped by 6.5% for 302 units; trailers slipped by 2.3% with 3,722 units; telescopic handlers dipped by 1.7% for 282 units; combine harvesters plunged by 15.4% with a limited 105 units sold.

At a press conference held this morning in Bologna for the federation’s general assembly, it was explained that this bad trend was partially a blowback from the forced registrations as well as ongoing weather conditions in the first months of the year, reduced income in the primary sector, the decreasing number of working farms in the country and insufficient incentive measures which continue to condition the ability to invest in the purchase new generation machinery. These factors are seen in the second-hand machinery market and reduce the prospects for a genuine replacement of machinery inventories.

A specific survey conducted by FederUnacoma based on Ministry of Transport data on the transfer of titles disclosed that sales of used machinery involve not only old units dating back 19 years, indicate that used tractors go back on average to 2014-2017 and that sales are strongly increasing. In 2016 with new tractor sales rose to 29,937 units whereas in 2017 the number was lowered to 22,702 while second-hand tractors climbed to 35,200.

During the press conference, it was noted that though the number of registrations in 2017 is much greater than the number actually sold, the difference between new and used units look higher and this harms efficiency and lowers the overall technology used on Italian farms.