The annals of construction equipment design history contain quite a few oddballs, experiments, eccentricities and other contraptions that seemed like good ideas on the drawing board but just never took hold. 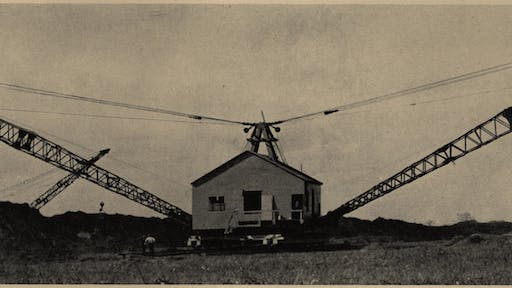 Many ideas for more efficient, higher-production earthmoving take root and flourish. Others, not so much.

The Double-Boom Excavator, a 1930s product of the Browning Engineering Company, is one of the oddest of the odd. There are two booms and one machine. Documentation of the thought processes behind the design of this truly unique machine have been lost to time, but an overview of its operation may shed some light on how it came to be.

Large-scale earthmoving for levee construction hit its stride in the early twentieth century, and machinery suitable for the excessive work was needed. On many jobs, the spoil could be excavated from the floodway and deposited to an adjacent levee. Browning, a manufacturer of shovels, locomotive cranes and material handling equipment, came up with a machine designed specifically for such work.

The machinery deck included two sets of hoist and draw works, one for each boom. Whether they were powered independently or from one engine is not known. It was operated by two men, one for each boom. It could be used as a dragline (as shown in the image) or with skips that were loaded manually. When one bucket or skip was loaded, it would be raised; the works would swing 180 degrees to dump that attachment, and the other operator would lower his skip or bucket into the pit for loading. The swing motion was controlled by a lever operated by both men, likely to eliminate one starting a motion before the other was ready; and one boom counterbalanced the other.

The logic of this design seems to have been to increase productivity. A normal dragline would load, swing, dump and return in each cycle. With the double boom design, one bucket was loading while the other was dumping, more or less doubling the number of loads per hour assuming the cycle time was the same. But it worked this way only when one bucket dumped directly opposite where the other bucket was digging; otherwise, one bucket hung in the air until the other was loaded or empty. Also, it was limited to digging and dumping only at the working radius of the boom.

Browning operated under at least five different names in Cleveland, OH, and its suburbs from the early 1900s until the early 1990s.

The Historical Construction Equipment Association (HCEA) is a 501(c)3 non-profit organization dedicated to preserving the history of the construction, dredging and surface mining equipment industries. With over 4,000 members in 25 countries, our activities include publication of a quarterly educational magazine, Equipment Echoes; operation of National Construction Equipment Museum and archives in Bowling Green, OH; and hosting an annual working exhibition of restored construction equipment. Our 2016 show is September 16-18 at our Museum.

Individual memberships are $35.00 within the USA and Canada, and $45.00 US elsewhere. We seek to develop relationships in the equipment manufacturing industry, and we offer a college scholarship for engineering and construction management students. Information is available at www.hcea.net, or by calling 419-352-5616 or e-mailing info@hcea.net.

Proterra will provide its battery technology for use in a proof-of-concept battery-electric hydraulic excavator Komatsu plans to bring to market by 2023.
Proterra Inc.
January 26, 2021
Follow Us