A demolition hammer, decades ahead of its time, is the first attachment designed for direct-impact demolition work. 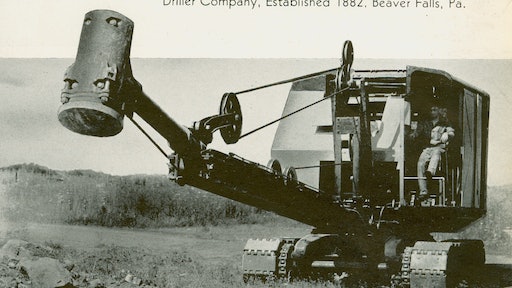 A Utility Demolition Hammer at work.

Often one of the tasks in construction is to break things—to destroy or reduce the size of objects of undesirable size and location. Before mechanization, men with sledges were usually assigned to make small rocks out of big ones. The advent of mobile cranes opened the door to the use of demolition balls that were dropped onto or swung against the object being dealt with.

In 1933, the Keystone Driller Company of Beaver Falls, PA, came up with something completely different. Introduced that year, their Model 18 excavator was rated at one cubic yard capacity as a skimmer, backhoe, dragline or clamshell. It was also offered for hammer service.

Not a pile hammer, but rather Keystone’s unique Utility Demolition Hammer. It mounted to the end of the shovel boom in two hours, and could be equipped with a 3,000-lb. hammer (as shown), pick, mattock, axe, hoe or ball peen. It could cycle 20 times a minute with a drop of 5 to 10 ft., and the operator could increase force with a sharp pull on the hauling line at the top of the cycle.

The Utility Demolition Hammer packed a considerable wallop, and the damage its powerful blows did was its undoing. There were no shock absorbers, so the shock of each blow came back into the machine, as well as the operator. In the same fashion, depending on ground conditions and what was being struck, the shock waves of the tool’s impact tended to pass through the object being struck into the ground beneath, leading to collateral damage nearby.

Despite its drawbacks, the Utility Demolition Hammer was decades ahead of its time. Not only was it the first attachment designed to equip an excavator for direct-impact demolition work, it did so using a variety of interchangeable tools. It foreshadowed the widespread use of such tools and attachments with excavators and loaders today.