Gradall will celebrate its 75 years of business during CONEXPO by showcasing one of its original machines along with a virtual reality demo. 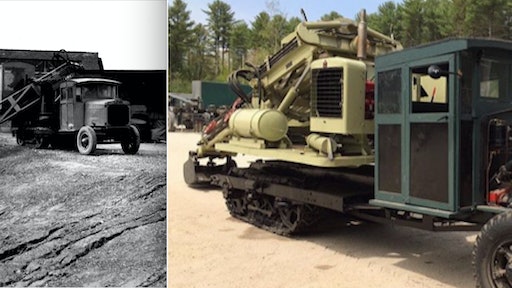 Hydraulic excavator No. 3 – one of the original machines that introduced the Gradall brand name in 1945 – will be exhibited at CONEXPO/CON-AGG 2020. Honoring America’s first fully hydraulic excavator, Gradall’s exhibit will mark the 75th anniversary of the brand with contrasts involving both old and new.

The No. 3 Gradall machine is operational using 90% of its original parts along with its Linn carrier and a rebuilt Waukesha engine and track drive. The control valves, hydraulic cylinders, hydraulic pumps and boom assembly are all restored to working order.

Originally, Gradall machines were the brainstorm of two brothers, Ray and Koop Ferwerda, Cleveland contractors who envisioned a productive, versatile finishing machine that could replace hand labor. Unlike cable operated construction equipment that dominated U.S. equipment manufacturing until the late 1950s, even the first Gradall machines were fully hydraulic.

In the intervening 75 years, while other major manufacturers copied and developed their own hydraulically powered excavators, Gradall is the only brand that continues to be manufactured exclusively in the U.S. Today’s versatile Gradall models, however, use advanced designs and load-sensing, high-pressure hydraulics that rival even conventional excavators in terms of boom power and cycle times.

The Gradall CONEXPO display and demo will be located in the North Hall, sharing exhibit space with other Alamo Group companies including Vacall, Schwartz, Alamo Industrial and Old Dominion.