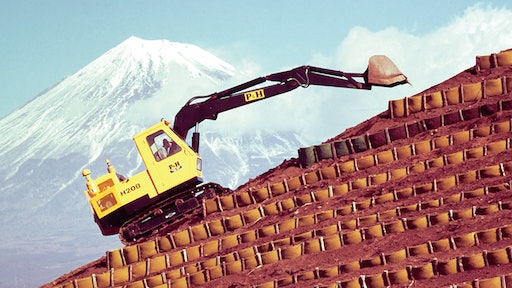 While it’s true that 2020 has presented some unprecedented global challenges, it is also a year of celebration for Kobelco Construction Machinery (KCM). This year marks 90 years since the manufacturer created Japan’s first electric mining shovel in 1930, an innovation that would go on to have a significant impact on both the business and the worldwide construction industry.

Kobelco’s success can largely be attributed to the Japanese manufacturer’s unrivalled reputation for building enduring, long-lasting, low maintenance machinery that can withstand some of the toughest job site conditions. For 90 years, quality has been Kobelco’s priority and this philosophy has never changed, despite the ever-changing and increasingly difficult economy.

From the development of the first electric mining excavator and the introduction of the first hydraulic machine, Kobelco’s history is packed with ‘firsts’.

In 1930, Kobelco created Japan’s first electric mining shovel, which paved the way for all future Kobelco construction machinery and set the tone for decades of pioneering technological developments.

By 1960, Kobelco completed the Okubo factory and manufacturing of construction machinery began. Today, this factory still exists and is dedicated to the production of Kobelco cranes. It is one of four Kobelco factories in Japan.

Over the last two decades, Kobelco has remained at the forefront of excavator technology – its hi-tech Itsukaichi factory now plays a key role as the production base for Kobelco excavators and the development of advanced technology.

In recent years, Kobelco has also become synonymous with demolition technology. The manufacturer had carved out a reputation as a market leader for demolition equipment in Japan and even built (at that time) the world’s highest building demolition machine (SK3500D) in 2006. However, Kobelco’s product development teams wanted to find a way to maximize productivity on demolition job sites and set about developing a machine structure with a common-use type base boom and interchangeable attachments, allowing one machine to be adapted to multiple specifications. The SK350DLC-10, SK400DLC-10 and SK550DLC-10 demolition machines all feature Kobelco’s proven NEXT system for both high elevation and foundation demolition work, giving the operator the ability to change tools on site and work at multiple heights with a single machine.

Today’s Kobelco now operates in over 100 countries with almost 480 dealers and 8,000 employees worldwide.

Kobelco Construction Machinery Co., Ltd. President and CEO Yoshinori Onoe says, “Ever since producing our first large domestic electric shovel 90 years ago in 1930, we have continued to create a wide variety of products to meet customer demands by adapting to our environment and developing new technologies. This 'user hands-on approach' has always been in our DNA – we continually strive to be a company that brings satisfaction to our customers by always providing new and innovative solutions.”

A major milestone for Kobelco in the last decade was the reestablishment of the Kobelco Construction Machinery Europe B.V. (KCME) headquarters in Almere, the Netherlands in 2013. Over the past 7 years, this important base has provided an efficient and responsive service and full aftersales support for its European customers across 64 dealers and 270 outlets in 60 countries.

From Kobelco’s parent company’s infrastructure to its construction machinery products and aftersales service network, everything about Kobelco is built to last. This important message is the key driver that fuels Kobelco’s growth in Europe and can be seen in its reliable, Japanese-built machinery as well as the comprehensive network of trusted, authorized dealers and efficient parts and service distribution. KCME’s commitment to the European market is also reinforced by its participation at key European events including bauma, Intermat and SaMoTer, and dealer support activities.

KCME Managing Director, Makoto Kato, says, “Europe is a region of huge significance for Kobelco. Since our reestablishment in Almere in 2013, we have been working hard to build the foundations for a strong and successful business and are very proud of how much has been achieved over the past 7 years.

“Kobelco has strong brand heritage and reliable products – our line-up now covers a significant range of machinery from the smallest SK08 mini excavator to the largest SK850LC for quarrying, demolition, forestry landscaping, earthmoving and utilities. However, a major part of our business is productive partnerships with our dealer network and we are pleased to have such a dedicated team of business managers and dealers to help showcase the Kobelco brand.”

Michel Wierts is responsible for Kobelco’s dealer network in western Europe: “Many of our dealers have been committed to the Kobelco brand since we re-entered Europe in 2013. These include Entrack and Beck in Norway, Kemp and De Bruycker in the Benelux, Molson and McSharry in the UK and Ireland. We’re proud to see these dealers grow along with us, better servicing existing customers and managing the increasing demand for Kobelco machinery.”

Jean-Philippe Delion is Kobelco’s business manager for the French regions: “From nine units sold in 2013 to 900 units targeted in 2020 to celebrate Kobelco’s 90th anniversary, the growth of our French dealer network is clear to see!”

Hanns Renz is Kobelco’s business manager for Germany: “The first new Kobelco excavators for Europe arrived in 2013 and I think we can look back with pride for what our dealers have achieved. European customers may be renowned as the most demanding in the world, but with Kobelco’s continued innovation and Japanese expertise, we will continue to stay ahead of the industry.”