The result of the agreement will be the first fleet of Cat autonomous trucks deployed by Rio Tinto. 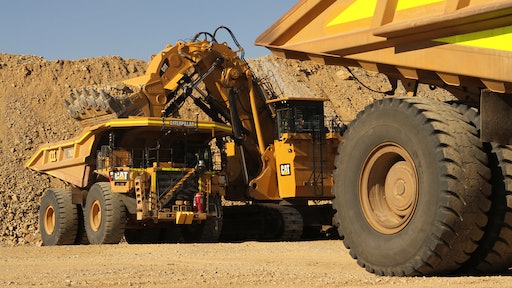 Caterpillar and Rio Tinto have signed an agreement for retrofitting 19 Cat 793F mining trucks for autonomous operation at the Marandoo iron ore mine in Western Australia. Caterpillar will also install Cat Command for hauling software for operation of the autonomous fleet. The result of the agreement will be the first fleet of Cat autonomous trucks deployed by Rio Tinto.

The first few trucks will be retrofitted in mid-2018, and the project will be completed by the end of 2019. Beyond installation and startup, both Caterpillar and the regional Cat dealer, WesTrac, will play ongoing roles in managing and supporting the autonomous haulage system.

“We are grateful for the opportunity to work with Rio Tinto in installing their first Cat autonomous haulage system,” says Jean Savage, Caterpillar vice president with responsibility for the Surface Mining & Technology Division. “Working with WesTrac, we look forward to helping Rio Tinto enhance operations with our proven mining technology.”

Rio Tinto Iron Ore chief executive Chris Salisbury says, “We are proud to have partnered with Caterpillar for 50 years and are excited about starting this new chapter in our automation story. This project with Caterpillar accelerates deployment of autonomous haulage via retrofit in our Pilbara operations and helps meet our objectives of making our operations safer and more productive.”

The Cat autonomous trucks system draws capabilities from the full range of Cat MineStar System technologies—Command, Terrain, Fleet, Detect and Health. At Marandoo, the mine-wide implementation of Fleet, the scheduling-and-assignment and material tracking system, will mark the first use of the system by Rio Tinto.

Several OEMs will introduce new mining equipment and technology which aims to improve productivity and efficiency for customers.
Sara Jensen
August 6, 2021
Follow Us