The FTR Trucking Conditions Index reported an increase in February, and is expected to reach double digit positive readings by year end due to freight growth and regulatory headwinds. 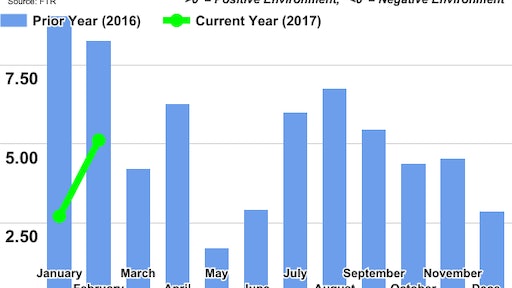 FTR’s Trucking Conditions Index (TCI) for February took a positive step, moving up about two and half points from January to a reading of 5.11. FTR expects the index to approach a double digit positive reading by year end due to the combination of freight growth and still-planned regulatory headwinds in 2017. FTR is forecasting improvement in freight growth in 2017, closing in on 4% loadings growth for the year. FTR’s regulatory forecast for 2017 has moved modestly down, although it still expects significant effect late in the year from the ELD implementation. On the downside, FTR does not expect contract rates to make a strong move for at least 6 months.

Jonathan Starks, Chief Operating Officer at FTR, comments, “The economic outlook has solidified for 2017, and freight growth is expected to accelerate versus what we saw in 2015 and 2016. While we have reduced our assumptions of productivity hits to truck fleets and drivers from the regulatory environment, the acceleration of freight growth is enough to keep utilization rates high, and climbing, during 2017. The downside is that the rate environment remains slow to pick up. Contract rates will begin to show year-over-year gains by the time Q2 hits, but any real acceleration isn’t likely to occur until the end of the year. Spot rates have begun moving upward, but are only a couple of percentage points above prior year levels.

“Since the economy is continuing on its modest growth path, regulations remain the key to understanding the outlook for 2017 and 2018. If ELD implementation is slowed or enforcement remains lax, then the impacts on utilization will be muted and the market will be slower to react to the changes. This scenario would limit how much the rate environment could go up.”