Power Systems Research's Truck Production Index decreased 3.8% during the first quarter, however, global demand for commercial vehicles is anticipated to continue growing during 2017. 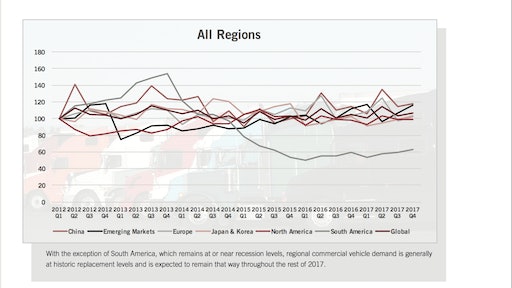 Overall, global demand for commercial vehicles has continued to improve this year, even as commodity prices have generally remained low. Many economists agree that global economic growth continues to improve and is expected to remain relatively strong throughout the year.

With the exception of South America, which remains at or near recession levels, regional commercial vehicle demand is generally at historic replacement levels and is expected to remain that way throughout the rest of 2017.

Medium and heavy commercial vehicle production is expected to be flat this year, compared with 2016. The Class 8 heavy truck segment could decline by approximately 3.6%, while the medium truck (class 4-7) segment will continue its positive trend and improve by another 3.3% this year. The growth will be driven primarily by a strong vocational segment.

Demand for Class 8 trucks declined last year, but it appears to have stabilized during the first few months of 2017. While a slight decline in demand is expected, 2017 should still be a pretty good year for commercial vehicles.

In Greater Europe, production for medium and heavy commercial vehicles is currently forecasted to be flat this year, compared with 2016. After a relatively strong couple of years in Western Europe, demand is expected to be softer this year with production declining by 1.6%, compared with last year. After very low demand in Eastern Europe during the past few years, the market has stabilized and is expected to improve by 6% this year as fleets start to upgrade their equipment.

Overall, 2017 is expected to be another good year for medium and heavy commercial vehicle demand. Again, it will be led by India. Commercial vehicle production in this region is expected to improve by 7.1%, compared to a relatively good 2016. However, much of South Asia continues to be hindered by historically low commodity prices.

Medium and heavy commercial vehicle production may have finally stabilized, but at very low levels; however, production is expected to increase by 5%, compared to 2016. Much of South America remains in recession or very close to it and stagnate domestic economies combined with low commodity prices continue to put pressure on both domestic and export demand. This likely will continue throughout the rest of the year.

Domestic and export demand for medium and heavy commercial vehicles are expected to be flat this year after coming off a dismal 2016. In Japan, the government moved out a scheduled tax increase to October 2019, due to the economic weakness in the country. To compete globally, both Japan and Korea rely on traditional export markets for increased revenue. However, the trend is to move vehicle production away from Japan and Korea to better compete with OEMs from other countries including China.

Production of medium and heavy commercial vehicles is expected to increase by 7% this year over 2016. The Chinese economy continues to struggle with overcapacity, primarily in real estate and manufacturing. However, the fleets still need to replace aging equipment. PSR is not expecting any increase in expansion demand for commercial vehicles through the remainder of the year.