A new report from the Diesel Technology Forum shows introduction of advanced clean diesel engines has led to their increased use, and a significant reduction in emissions. 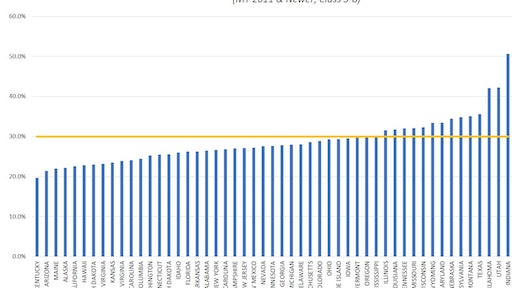 Introduction of more advanced clean diesel truck engines and emissions control systems into the nation’s trucking fleet over the last 5 years is now at a 30% level and has yielded significant emission reductions and substantial fuel savings, according to new research commissioned by the Diesel Technology Forum.

“Almost 3 million heavy-duty diesel commercial vehicles introduced in the U.S. from 2011 through 2016 are now on the road powered by the latest generation clean diesel engines, and these trucks have delivered important benefits in the form of cleaner air, fewer carbon dioxide emissions and dramatic fuel savings. Over a 5-year period, the newest generation commercial vehicles have saved 4.2 billion gallons of diesel fuel, and reduced 43 million tonnes of carbon dioxide (CO2), 21 million tonnes of nitrogen oxides (NOx) and 1.2 million tonnes of particulate matter,” says Allen Schaeffer, Executive Director of the Diesel Technology Forum.

“Because diesel overwhelmingly dominates the heavy-duty truck sector and is also the number one power source for medium-duty vehicles, the transition to newer generations of clean diesel technology (2011 and later MY) is significant. The 30% national average is up from just 25.7% last year. The research also estimated that significant further benefits would accrue to communities across the country if more of these newer generation clean diesel trucks enter into service.

“California, which ranks 46th nationally with only about 25% of commercial trucks there equipped with the latest generation clean diesel technology could see substantial benefits for accelerated adoption of newer clean diesel technology trucks. If California were to achieve the same new technology penetration as Indiana (51%), it can eliminate another 200,000 tons of NOx and 11,000 tons of fine particles that would bring cleaner air faster to all California communities than any other strategies,” says Schaeffer.

The benefits research was conducted by IHS Markit, a global technical marketing research firm headquartered in Southfield, MI. State rankings data is based on Diesel Technology Forum (DTF) analysis of IHS Markit vehicles in operation data representing Class 3-8 diesel trucks from Model Year 2011 through 2016 in all 50 states and the District of Columbia through December 31, 2016.

“Achieving these substantial emissions reductions and efficiency advancements was in part the result of collaboration of the nation’s leading truck and engine manufacturers working with the Department of Energy and 21st Century Truck Partnership’s 'SuperTruck' program, says Schaeffer. “While the intent of this valuable program is to push the margins of research engineering efficiency, it is clear that demand is leading many of these strategies to be integrated into the commercial truck fleet and contributing to real-world emissions reductions and fuel savings.”

“In addition to these substantial societal benefits, a Class 8 tractor-trailer sized vehicle powered by the latest generation clean diesel engine will save the owner 960 gallons of fuel each year, relative to the previous generation of technology. When these benefits are compounded over the entire population of the clean diesel fleet, the 4.2 billion gallons of fuel saved between 2011 and 2016 is equivalent to almost 40% of the strategic petroleum reserve,” says Schaeffer.

How Do Newer Diesels Achieve Near Zero Emission Levels?