The FTR Shippers Conditions Index dropped to a -6.7 reading in August primarily due to short-term fuel cost increases caused by Hurricane Harvey disruptions, as well as increased logistic costs for shippers that are expected to persist into 2018. 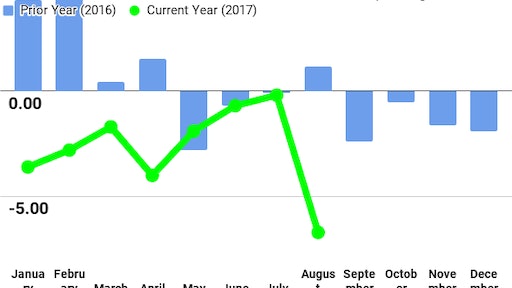 FTR’s Shippers Conditions Index (SCI) took a significant hit in August dropping to a -6.7 reading, primarily due to short-term fuel cost increases caused by Hurricane Harvey disruptions. In addition to the fuel cost increase, the more negative SCI reading was also impacted by increased logistic costs for shippers that are expected to persist into 2018. Spot prices have already spiked due to full capacity utilization. Pressure on contract pricing is expected to increase by the end of 2017 and into 2018, keeping the SCI index in negative territory through the period.

Jonathan Starks, Chief Operating Officer at FTR, comments, “Shippers are in a tough position right now. We have known for some time that the trucking industry has been operating with very little excess capacity; however, the weak pricing environment masked that phenomenon for the last year. Hurricanes Harvey and Irma exposed shippers to this new reality. There just wasn’t enough excess capacity to deal with spikes, and the result was a significant spot market pricing gain that persisted through early October. Spot rates have begun to normalize, but that still puts rates at +20% compared to last year. When you couple the Hurricane impacts with increased freight demand and the fast approaching ELD implementation, there’s a real fear that loads won’t get delivered. This is already beginning to show up in the contract markets. Spot prices were the canary in the coal mine - contract pricing is likely to show significant gains through most of 2018.”