FPT's new Cursor 13 NG engine delivers up to 460 hp and is capable of running on CNG, LNG, methane and biomethane. 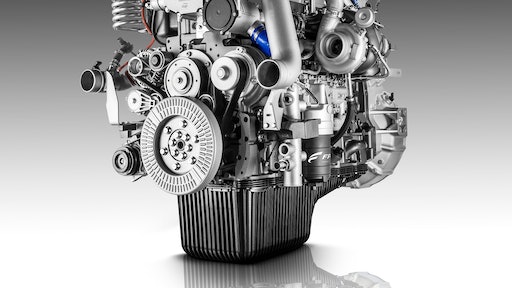 One hundred percent Natural Gas (NG): FPT Industrial has unveiled its newest and most powerful NG engine. The Cursor 13 Natural Gas was been presented at the FPT Tech Day 2017 event held in Turin on Monday, October 30. It is the most powerful 100% Natural Gas engine available on the on-road segment market today, and is the first purely NG engine on the market specially developed for long-haul missions. The Cursor 13 NG allows FPT Industrial to broaden and strengthen its position as leader in the Natural Gas segment.

Leveraging FPT Industrial's cutting-edge technologies and reliability, proven by more than 30,000 NG engines sold worldwide in the last 20 years, the Cursor 13 NG delivers power up to 460 hp at 1,900 rpm and torque up to 2,000 Nm at 1,100 rpm, thus offering up to 15% more power and 18% more torque than FPT Industrial’s 8.7 lL NG engine. Cursor 13 NG is a mono-fuel 100% Natural Gas and an easy-to-use solution for end-users, since it can run with CNG (Compressed Natural Gas), LNG (Liquefied Natural Gas) starting from “methane number” 70 and biomethane. The bio-methane solution is capable of reducing CO2 emission levels near zero.

The use of bio-methane has the added benefit of reducing dependency from fossil fuels, as it can be generated from agricultural and urban waste, sewage, or waste from the food industry. It can be produced locally, dramatically reducing the need for transporting energy and the related CO2 emissions. In addition, its production process creates valuable by-products, such as bio- CO2 for refrigerated units and bio-fertilizer for agriculture.

The new Cursor 13 NG engine, as well as other FPT Industrial NG engines, uses stoichiometric combustion to generate its power. Since 1995 this has been FPT Industrial’s chosen technology, proving to be a viable and cost-efficient solution available today to meet Euro VI Step C emission limits. Thanks to the stoichiometric combustion the Cursor 13 NG complies with this standard with a simple and easy-to-install 3 way catalyst with no-EGR, no-SCR and no-DPF (regeneration free solution). The new engine’s CO2 emission level is significantly lower (-9%) compared to Diesel and can reach near zero by using bio-methane. At the same time, Cursor 13 NG allows a 98% PM reduction and NOX emissions which are 48% lower when compared to Euro VI compliant Diesel engines. Furthermore, Natural Gas engines decrease noise pollution with a smoother and quieter engine combustion cycle (Otto cycle, 12:1 compression ratio, which is far below the 17:1 ratio of the Diesel cycle), slashing vehicle noise pollution operation at less than 71 dB.

Sustainability for both environment and customers: the EGR free combustion, as well as the multipoint fuel injectors and fuel rails, grant class leading fuel consumption: fuel cost savings is up to 30%-40% (depending on the fuel cost) compared to the Cursor 460 hp Diesel powered engine. The new Cursor 13 NG engine achieves high reliability standards both on mechanical and thermal stress thanks to the Nickel-Resist cast-iron exhaust manifold, water cooled wastegate turbocharger and Compacted Graphite Iron (CGI) cylinder head.

FPT Industrial’s lean technology that avoids Diesel and the Ad-Blue adoption grants a lighter and more compact solution, allowing optimization of the truck payload and space availability. This feature gives the possibility to mount more capacious fuel tanks on the vehicle, widening the mission range. Thus, the new Cursor 13 NG engine is the best alternative with low climate impact for long-haul operations, since it has been developed to meet high demands on performance and low operating costs without compromises on durability.

The FPT Industrial Cursor 13 NP engine is protected by two patents: the first, for which patent protection is in progress, is the FPT Industrial proprietary knock control that makes it possible to increase the performance, enables the widest fuel compatibility, and protects engine and 3-way catalyst from misfiring. The second one is FPT Industrial’s proprietary reactive air-flow control management system, a new stoichiometric ratio control logic that is applied during gearshifts. This ensures a continuous torque delivery when coupled with AMT gearshifting, which enables maximized performance and the fastest gearshift. FPT Industrial has applied for patent registration for this system.

The DC13 166 offers fuel savings of up to 2% and is suited for weight-sensitive applications where solid power is crucial.
Scania AB
August 16, 2019

Debuted at bauma China 2018, the Cummins 8.9-L engine provides up to 400 hp and is dual certified to both EU Stage V and China Stage IV emissions requirements.
Cummins Inc.
November 27, 2018

During Agritechnica, MAN introduced its 9.0 L D1556 engine with a modular aftertreatment system that can be modified to comply with various emissions regulations.
MAN Engines, a Business Unit of MAN Truck & Bus
November 15, 2017

Scania's new gas engine provides a power output of 410 hp and can be used both for long-distance transport and construction-site movements.
Scania AB
November 8, 2017

The Volvo D13TC utilizes turbo compounding technology that recovers energy typically wasted through the exhaust, converting it into usable mechanical energy that is transferred back to the engine.
Volvo Trucks North America
July 18, 2017

DEUTZ will introduce its TCD 9.0 diesel engine with a power rating of 300 kW and a compact design for installation in various applications at bauma China 2016.
DEUTZ Corporation
November 21, 2016
Follow Us