Scania is testing the use of wireless bus stop charging for an electric hybrid bus which will operate in regular urban traffic in Sweden. 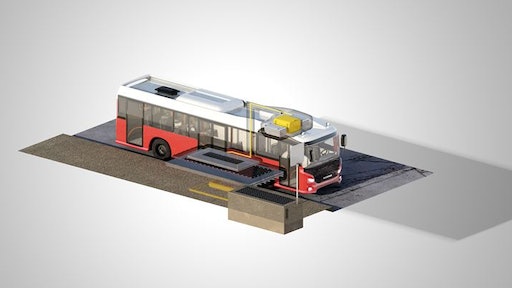 This is the first time the technology is being tested in the Nordic region, and both the bus and bus stop solution are part of a research project where Scania, the public transport operator for the Stockholm region SL, Vattenfall, Södertälje Municipality and the Royal Institute of Technology (KTH) are cooperating to develop a silent and sustainable public transport system. The project is partly financed by the Swedish Energy Agency.

For the first time ever, this type of technology is also being tested for a more extreme climate, which this type of infrastructure must also cope with to be relevant in more northerly parts of the world. Wireless bus stop charging means that the bus parks over a charging segment located under the road surface at the charging station, where charging occurs automatically. The design of the inductive technology has been adapted so as not to disturb existing urban environments and is essentially invisible. Seven minutes of wireless charging is enough to cover the entire 10 km-long route, which the bus will operate in Södertälje.

“The electric hybrid bus in this project demonstrates a technology track for a more sustainable transport solution. The inductive charging technology is both silent and invisible. The field test in Södertälje is important ahead of the choices facing both society and the automotive industry with regard to eliminating emissions and reducing noise from traffic in sensitive urban environments,” says Hedvig Paradis, who is a project manager at Scania and responsible for the company’s participation in the research project.

The cost of the wireless bus stop charging project amounts to just over SEK 38 million, of which Scania is investing SEK 22 million. The Swedish Energy Agency has granted almost SEK 10 million in research funding, which will be divided among the Royal Institute of Technology, Scania and SL.

“This is one of several projects Scania is conducting in order to find solutions for future sustainable transport services in cities,” says Anders Grundströmer, Head of recently started Scania Sustainable City Solutions. “We are working on identifying the needs of cities and on creating systems for eco-friendly, fast, secure and cost-effective transport solutions, which are based on locally-produced alternative fuels including electrification.”

Electrification of the transport sector will demand various technologies and solutions – both in terms of where and how vehicles are charged. Charging can either occur when vehicles are stationary at depots and bus stops or during operation. For charging during operation, the alternatives are conductive charging via a pantograph or inductive charging – or a combination of these techniques.

The choice of solution depends on what transport task will be performed. The size and weight of the batteries, which can be carried on board the vehicle, for example, determines how much of the charging must occur while in service.

The bus that Scania will test in Södertälje’s urban traffic is a hybrid bus, i.e. featuring technology, which means that the bus’ batteries are also charged during operation by utilizing braking power. Charging may also occur using the bus’ combustion engine, which operates on fossil-free fuel.