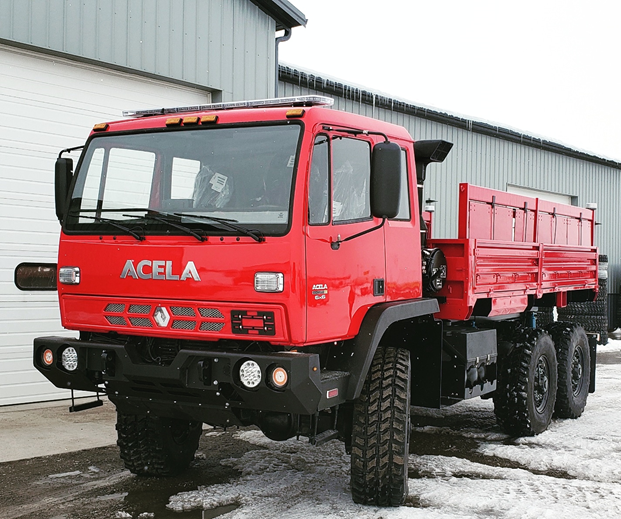 “General Truck Body is excited to add the Acela Monterra line of truck chassis to our product offerings,” says Glen Maikranz, President of the Custom Division of General Truck Body. “With flooding events becoming almost commonplace, we felt that offering the Monterra 6x6 High Water Flood Rescue Vehicle as our first-line vehicle would be ideal for our emergency response customer base. With a growing number of agencies, regularly effected by flooding and growing tired of repurposing older, unreliable military trucks, we are seeing a much greater demand for modern, purpose-built flood rescue trucks. We’re thrilled to be able to debut the Monterra 6x6 High Water/Flood Rescue Truck at FDIC. It’s an important show for us to share this incredibly capable and unique vehicle with the First Responder audience. The Acela Monterra, with its 46-in. tires, all-wheel-drive, 50-in. water fording capability and central tire inflation system has proven to be the perfect solution for flood rescue response and can easily, serve double-duty, as a wildland/brush truck outside of flood/hurricane season. We’re also excited to start launching several lines of brush trucks and pipeline service vehicles on the Monterra chassis.”

“We’re thrilled to have General Truck Body representing our high-mobility Monterra flood rescue trucks and truck chassis lines,” says David Ronsen, President of Acela Truck Company. “General Truck Body understands the needs of their customers and has a reputation as one of the highest quality truck body solution providers in the U.S.A. By working together, an increasing number of fire departments, municipalities and commercial entities will be able to significantly increase their operational capabilities and productivity with our high-mobility trucks.”

The companies will develop and industrialize fuel cell systems for the European, North American, and Asian markets.
MAHLE Powertrain
September 28, 2020

The collaboration lead to the development of electrical products to be mounted near the battery in different combinations for the OEM's ICV Trucks, Electric Buses and City Buses.
MTA SpA
September 25, 2020

NFI will demonstrate the ability for battery-electric trucks to transport freight under a variety of operating conditions.
Volvo Trucks North America
September 22, 2020

Trevor Milton has stepped down as Executive Chairman; Stephen Girsky has been appointed as the new Chairman of the Board.
Nikola Corporation
September 21, 2020

Use of Bosch's common-rail system enabled the efficiency gains in the truck diesel engines.
Bosch
September 18, 2020