Class 8 Orders Start 2021 on Positive Side

While North American Class 8 orders were down in January compared to the previous month, they increased on a year-over-year basis. 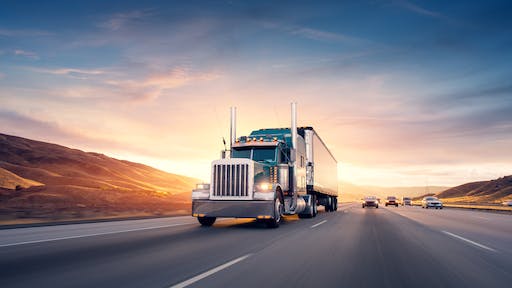 Preliminary North American Class 8 truck orders for January 2021 remained at a positive level. While orders were down from December, they increased on a year-over-year basis.

FTR reports January orders reached 42,800 units, and was the fourth consecutive month in which Class 8 orders were above 40,000 units. This was an 18% decrease on a month-over-month basis, but increase of 144% year over year.

ACT Research, on the other hand, reports preliminary orders reached 42,200 units for a 17% decrease from December 2020. However, the firm says this was a 146% increase compared to January of last year.

Complete industry data from both research firms will be available in mid-February.

According to FTR, freight growth remains high and fleets are looking to add capacity as quickly as they can. This means OEMs and suppliers are trying to keep pace; FTR says fleets are continuing to place orders through the end of the year to ensure they can get trucks as they become available.

Don Ake, Vice President of Commercial Vehicles for FTR, commented in the research firm's press release announcing the figures, “Currently there are shortages of raw materials and component parts, which will result in supply being unable to meet the demand of Class 8 trucks in the short-term. Class 8 suppliers are working diligently to ramp up production but are hindered by the pandemic and material shortages. In addition, imported parts deliveries are being delayed up to two weeks at the ports.

“The supply chain is struggling after the surge in demand following the economic restart. Now companies are having problems hiring back enough workers due to virus concerns and protocols. Also, the steel plants took longer than expected to fire back up. Demand for Class 8 trucks is surging, but the supply chain is hindered.

“Our industry is very skilled and experienced in dealing with roadblocks. It will handle this situation better than other sectors. However, this will limit first-quarter production and will probably run over into part of Q2. When the vaccine enables employment to increase and the other bottlenecks are removed, this will end up being a robust year for Class 8 sales.” 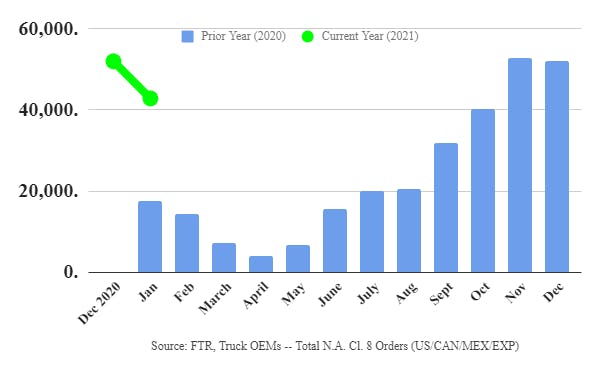 “At this introductory pass at 2021 commercial vehicle data, the consumer economy lacks the stimulus-fueled robustness that characterized spending into early Q4,” said Kenny Vieth, ACT’s President and Senior Analyst, in the ACT press release announcing January's order activity. He continued, “Even as consumers look less hearty – at least in the short-term –manufacturing sector indicators show that the industrial economy is shaking off the dust of 2 years of tepid activity. The slower economic expansion of the past two months is reflected in spot freight rates, which have trended lower since November. Some, but not all, of the pullback relates to seasonality, which was also reflected in January’s preliminary commercial vehicle net order data.”

Regarding the medium-duty market, Vieth commented, “Despite January’s preliminary net order moderation, the pandemic-driven shift in consumer spending from experiences to goods remains a benefit for the providers of local trucking services, and the symbiotic relationship between heavy-duty freight rates and medium-duty demand continues to impact this market segment.”

*Content based on information from ACT Research and FTR.