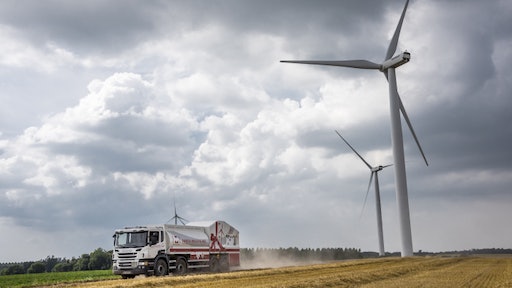 A groundbreaking customized Scania P 410 truck designed for wind turbine oil changes has been conceived and developed by Maser Engineering, a French company. The new truck reduces maintenance time by 400%.

Guillaume Allaire, Business Manager at Maser Engineering explains, “I wanted to develop equipment that was capable of carrying out oil changes quickly and easily.”

The four-axle Scania P 410 with its three steered axles is unique not only in France, but even in Europe.

Two years of research and design were needed to bring about this ‘Swiss Army knife’: a Scania weighing 19 tonnes at no load, including a 12,000-L tank separated into three compartments (for used and new oils), a mechanical compartment equipped with a 600-L heating tank, a power generator and a 120-m double hose reel.

“With this truck, an oil change can be done four times faster. Products have absolutely no contact with air. In short, operations are made safe and the risk of pollution is limited,” Allaire says.

Maser Engineering hopes to gain a foothold in the French market with the new truck which is assembled according to the short-circuit principle.

“All participants, from Scania to the coachbuilder, are based in Pays de la Loire, in western France. We are involved in renewables and green energy, so sustainable construction makes sense to us,” says Allaire.

Scania’s quick and positive response with this chassis, which is sized to meet the needs of the activity made all the difference to Maser Engineering.

“When we approached them, we felt that the project elicited their interest because of the technical sophistication of the truck, and the environmental focus of our work,” he recalls.

CEA reports equipment sales in September were stronger and only down 7% compared to 2019.
October 28, 2020

AEM has released its Canada Ag Tractor and Combine Report for September 2020.
October 13, 2020
Follow Us