In addition, Vice President Mike Pence called on Congress to ratify the USMCA to aid the U.S. economy. 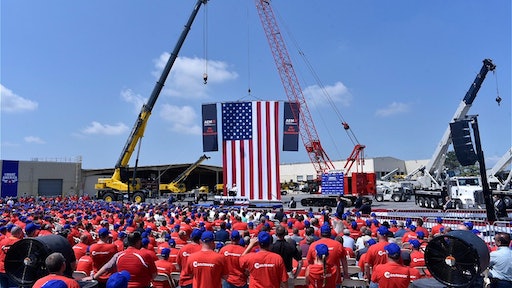 United States Vice President Mike Pence addressed more than 1,000 Manitowoc employees at an event hosted by the company at its manufacturing facility in Shady Grove, PA. The Vice President called on Congress to ratify the United States-Mexico-Canada Agreement (USMCA) and highlighted how the new trade deal will add $68 billion to the U.S. economy and create over 176,000 jobs.

Read more about the USMCA and how industry associations like AEM have been emphasizing the need the pass the replacement to NAFTA in the article "Associations Urge Passage of USMCA."

“The time has come for Congress to pass the U.S.-Mexico-Canada Agreement,” said the Honorable Mike Pence, Vice President of the United States. “This agreement is a good deal for Pennsylvania, it’s a good deal for American workers. And we’ve got to get it done and we’ve got to get it done this year. In fact, I’ve been traveling all across the country telling the story of the USMCA and the difference that it’s going to make, not only in manufacturing, but literally in industries all across this country. The truth is, under the USMCA this President says the American worker is going to win like never before.”

The USMCA is the trilateral free trade agreement between the United States, Mexico, and Canada that will secure duty-free market access for U.S. equipment manufacturers to the industry’s two largest export markets. Thursday’s event was held at Manitowoc’s facility in Shady Grove and streamed live to tens of thousands of viewers across the country.

“The USMCA will make sure equipment manufacturers such as Manitowoc are better positioned to compete and win in the global economy,” said Barry Pennypacker, President and CEO of Manitowoc. “Congress should do their job and pass the USMCA so that we can do what we do best — make world-class cranes right here in Shady Grove, Pennsylvania.

Equipment manufacturers support more than 47,000 jobs in Pennsylvania and 1.5 million jobs across the US and Canada.