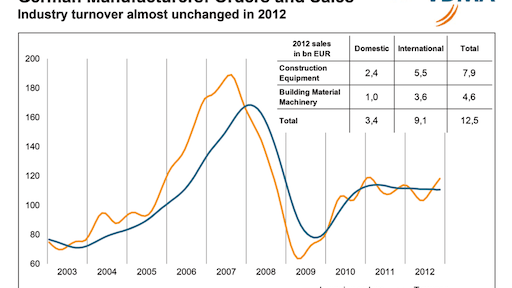 In 2012, the German Construction Equipment and Building Material Machinery industry generated 12.5 billion EUR in turnover. Construction equipment made 7.9 billion EUR of this sum while 4.6 billion euros were made with building material, glass and ceramics machinery. This is a nominal decrease of around 1% compared to 2011. After having seen an upturn following the 2009 economic and financial crises, the industry is now moving sideways on this decent level it managed to also achieve again in 2012.

Starting the bauma-year with confidence, but no peaks expected for 2013

“Although, on the whole, times are difficult, last year was a good year for our industry,” says Johann Sailer, Chairman of the industry’s association when reflecting on the results. According to him, 2013 will not see any peaks either. However, companies belonging to the industry are currently full of confidence in light of bauma, the industry’s international leading fair, which will take place in Munich from April 15 to 21, 2013. “This event, which takes place every three years, in itself has always inspired new business opportunities. It also is the number one indicator for upcoming market trends.” Taking a look at this year’s figures, though, the first couple of weeks have been rather reluctant so far. The number of orders which came in in the fourth quarter of 2012 do not yet indicate any growth either. An increase of demand is most likely to be seen in the second half of the current year, so that the good level of the previous year should also be reached in 2013 once again.

No company can do without China

The future looks less bright for the construction equipment and building material machinery industry than in the past. The discrepancy between the markets in North and South Europe keeps getting bigger. It is impossible to predict if and when the construction industries of Spain, Portugal and Greece will finally pick up again. Germany has been and probably will remain stable in this regard. It seems most likely that growth will rather be generated in less traditional markets “which many of us might not really have been considering yet,” is Sailer’s view.  In countries such as Indonesia, Myanmar, some states of Southern Africa or even Mongolia there are lots of raw materials ready to be extracted and those countries’ requirements in improving their infrastructure are enormous.

The industry is putting a spotlight on Indonesia already by making it the partner country of this year’s bauma. For many years already there have been regular meetings and visits taking place between government departments and associations of Indonesia, Messe München, VDMA and its member companies. This year’s bauma offers the opportunity to deepen these relationships. ”We would like to try and convince Indonesian decision-makers to invest into the right technology and modern standards,” Sailer explains. bauma is the ideal platform to do so. It is only here that investors can gain such a comprehensive and full overview of the current state of technology and see for themselves the kind of construction equipment, building material and mining machinery which is on offer.

Indonesia’s economy in a good position

Indonesia’s economic data is impressive: A gross domestic product of 840 billion USD (2011), the third quickest growing economy of Asia and one of the 20 largest national economies in the world. In 2011, the Indonesian economy grew by 6.5%; for 2012 another growth of nearly 7% is expected. The construction industry represents 10.2% of the country’s economic strength and is therefore the fifth most important sector of the country. Sales of construction machinery grew significantly over the past couple of years; in 2007 nearly 7,500 heavy earth-moving machines were sold, while 2011 already saw a demand of 20,000 units. Mid-term, also the raw material sector will call for big investments. By 2025, the country will have been implementing its so-called "Master Plan for the Acceleration and Expansion of the Economic Development (MP3EI)." A budget of nearly 400 billion US dollars is allocated to this plan, with nearly half of this sum to be invested in infrastructure projects. In total, the government identified 21 priority projects worth 33.4 billion USD, including the construction of toll roads, bridges, harbors or water industry facilities, among other things. The demand of building material is also constantly increasing. According to its government, Indonesia required about 48.4 million tons of cement, 13.3 million tons of steel and 1.3 million tons of asphalt concrete in 2012, showing an upward trend for the future.