Machinery Production in China is forecast this year to rebound 11% to $426 billion after suffering from overcapacity in 2012 that limited industry growth. 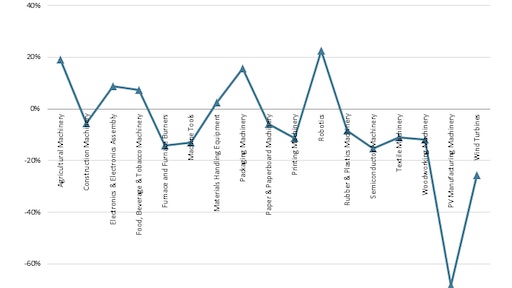 According to a new report from IMS Research, now part of IHS Inc., the projected growth for Machinery Production in China in 2013 is encouraging, given that revenue last year grew by less than 10% (the lowest rate in many years) following the severe impact of a weak export market and a shortage in investments. Prior to the slowdown, China’s machinery production had expanded by a robust 20% in 2011 to $379.8 billion. Economic performance was also strong in 2010 after the government’s deployment of a 4 trillion yuan ($643 billion) stimulus policy in 2009.

Trouble began in the second half of 2011 because of high inflation and an overheating economy, and the central government stepped in by implementing tightening policies. Even so, other difficulties persisted, according to findings from the report entitled “The Machinery Production Yearbook – China – 2013.”

“Many industries in China suffered from significant over capacity in 2012, including construction machinery production, paper and paperboard production, and photovoltaic manufacturing to name a few,” says Jay Tang, author of the report and analyst for industrial automation at IHS. “The Chinese government will likely maintain a tightening policy in the first half of 2013, but this won’t continue in the second half because of a bad export situation and the slowdown in economic growth.”

China’s machinery relies heavily on the export market, but the weakening demand of export markets in the U.S. and the European Union is making manufacturers pay more attention to the domestic market. Among machinery industries in China that experienced decreased activity in 2012 were those engaged in cranes, rubber and plastics, semiconductors, textiles, woodworking, and metalworking.

Signs emerged by year-end that the China economy was starting to recover after a generally tough 2012 for machine builders. Real estate was heating up, and investments in the railway system were continuing.

Still, the Chinese government is expected to remain cautious this year with any stimulus policy as the economy improves, given concerns over excesses resulting from the massive stimulus during the 2009 global recession. China’s economy also will likely remain constrained by limited Eurozone demand and weakness in non-state investments, IHS believes.