The October reading for FTR's Trucking Conditions Index dipped slightly from September, but still indicates tight capacity for the market. 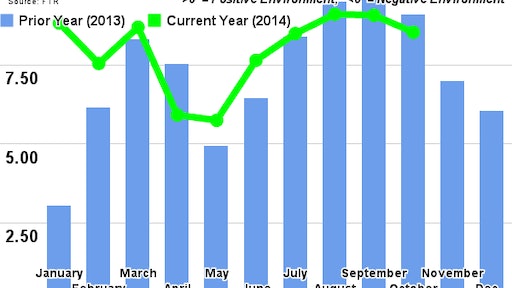 FTR’s Trucking Conditions Index (TCI) for October, at a reading of 8.53, fell only slightly from September’s level reflecting still strong fundamentals for trucking firms. Underlying capacity utilization is retreating from the dangerous 99% level reached earlier in 2014, but the market is expected to remain tight. FTR forecasts capacity to ease very modestly in 2015 and, when combined with continued freight growth, rising rates and falling fuel costs, the index will remain elevated throughout next year.

Details of the October TCI are found in the December issue of FTR’s Trucking Update, published November 25, 2014. The ‘Notes by the Dashboard Light’ commentary investigates the likely impacts of falling oil prices on transportation. Along with the TCI and ‘Notes by the Dashboard Light,’ the Trucking Update includes data and analysis on load volumes, the capacity environment, rates, costs and the truck driver situation.

Jonathan Starks, FTR’s Director of Transportation Analysis, comments, "Market fundamentals remain strong for carriers as we approach the end of 2014. Our expectations for the TCI are for it to maintain its current high level throughout 2015, as we continue to see a very positive market for fleets and drivers for at least the next year. Capacity is still tight, but not nearly as severe as early in 2014. FTR data indicates a drop of nearly 1.5 percentage points in truck utilization since the high of 99% achieved last winter. The Market Demand Index from Internet Truckstop confirms our stance - after averaging nearly 25 during the first half of 2014, it is currently below 20. Contract rates continue to edge higher, and spot rates are still well above prior year levels, even accelerating some in the last few weeks. Internet Truckstop data shows rates up nearly 20% at the end of November. Spot rates will come across tougher year-ago comparisons starting in December but are expected to remain elevated during 2015. Fleets are feeling more bullish about 2015, and it is showing up in ordering activity for new trucks. Class 8 new truck orders hit their second highest level ever in October and fell only modestly in November. While we don’t expect much in the way of additional capacity coming into the system, the carriers are certainly trying to entice drivers, reduce maintenance costs, and enhance fuel economy.”