Global construction market on positive trend leading up to bauma 2016

Messe Munchen Intl. reports the global construction and building materials machinery markets will continue to progress positively in 2015 and leading up to bauma 2016. 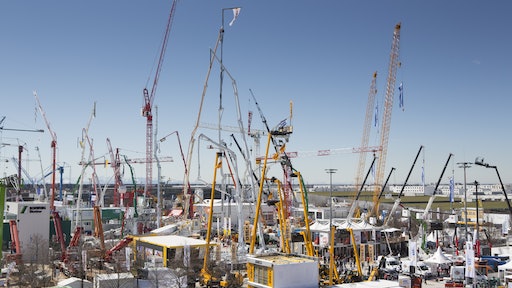 bauma will take place once again at the Messe Munchen exhibition center in Munich April 11 to 17, 2016.

Last year North America and Europe were the most dynamic construction machinery markets in the world. And according to market experts, this trend could continue in 2015. This is one of the reasons why the market in construction machinery and building materials machinery is in an upbeat mood in this "pre-bauma year," despite all the political uncertainties. The next edition of bauma takes place from April 11 to 17, 2016 at the Messe München exhibition center.

The industry associations are seeing good prospects for the construction machinery and building machinery market in the current global market. Things are going well for the customers, the building industry is growing, and demand is there—not only in Europe, but above all worldwide. Take the U.S., for example: here business is buoyant. In 2014 the European manufacturers alone managed to increase their sales there by around 19%. And the signals for 2015 are also positive. Companies hiring out construction machinery are one of the key drivers of this demand. Last year already they were the biggest customer in the U.S.

The market in Europe is also picking up again, and the European construction industry is no longer hitting the headlines for the wrong reasons. According to market researchers at Euroconstruct, all the segments in the building industry in Europe will recover in 2015. That will lead to an overall improvement in demand for machinery. Great Britain and Scandinavia are among the countries offering the most promise in Europe. And the German market will continue to be an anchor of stability in Europe.

According to the industry associations, China—the world’s biggest market for construction machinery—will stabilize in the current year, although initially at a low level. In 2014 the sector in China had to cope with a double-digit decrease for the third time in a row. A real turnaround in this situation is not yet in view, because of overcapacities and the relatively new machinery fleets, but some recovery is predicted. The statistics company Statista is forecasting the market for construction machinery in China will reach a value of almost 44 billion U.S. dollars in 2015.

Also picking up, alongside the traditional markets, are the markets of the Near and Middle East. The building sector in Saudi Arabia, for example, is currently one of the fastest growing sectors of the country’s economy, according to Germany Trade and Invest (GTAI). In the medium term, too, this high level of state investment in expanding the transport infrastructure will ensure above-average growth for the sector. Provisional figures for 2014 in the construction industry in this Gulf monarchy put growth at around 6.7% in real terms. The second largest Gulf market for construction projects is the United Arab Emirates. According to GTAI analysts residential construction boomed here in 2014, with investment totaling 16 billion U.S. dollars, representing a rise of 35% compared to the previous year.

The market in India, too, according to sector insiders, should also move forward again. The consultants at Off-Highway Research are expecting sales of construction machinery by latest 2016, in this, the seventh-largest country on Earth, to regain the highest level reached so far, in 2011. In that year 72,000 units were sold. By 2018, the analysts predict that sales will rise continuously to in the region of 97,000 units. The products most in demand on the sub-continent remain the same as today: backhoe loaders, crawler-excavators, mobile cranes, mobile compressors, compaction equipment and wheel loaders.

Uncertainty through political crises is a factor that could halt growth on the world markets. The key criterion for the industry is the extent to which the customers let themselves be influenced by these uncertainties—how they act and react. Johann Sailer, President of the VDMA Construction Machinery and Building Materials Machinery Association, observes: "Any scenario seems possible to us. So we are not expecting the markets to outperform. Nevertheless we are optimistic, including for bauma next year." For the exhibitors and visitors taking part in the World’s Leading Trade Fair for Construction Machinery, Building Material Machines, Mining Machines, Construction Vehicles and Construction Equipment this is an encouraging outlook.