Preliminary data from FTR shows Class 8 truck orders in November were at their lowest level since September 2012 and 59% below sales from a year ago. 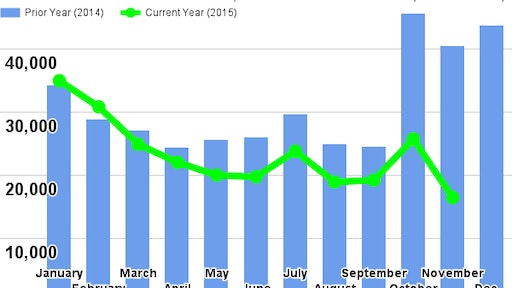 FTR has released preliminary data showing November 2015 North American Class 8 truck net orders at 16,475, 59% below a year ago and the lowest level since September 2012. This was the weakest November order activity since 2009 and was a major disappointment, coming in significantly below expectations. All of the OEMs, except one, experienced unusually low orders for the month. Orders are expected to be better, but not necessarily good, the next two months. Orders for the last 12 months are now annualized at 300,000 units.

Don Ake, FTR Vice President of Commercial Vehicles, comments, "The November orders are very concerning. People were optimistic when orders held up well during the summer. Now we get into the peak order season and have the lowest orders of the year. The weak orders are the reason for the recent OEM announcements regarding production cutbacks and layoffs. Truck inventories are high and retail sales have stalled. The industry would appear to have enough new trucks for now. The manufacturing sector has sputtered and freight growth has slowed. Orders should stabilize soon, but backlogs will be shrinking, necessitating larger production cuts than were previously expected."