AGCO recently opened its expanded production facility and Intivity Center in Jackson, MN, which is open to the public for touring. 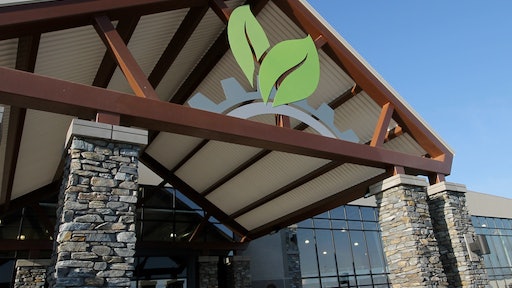 AGCO, Your Agriculture Company, a worldwide manufacturer of agricultural equipment, opened its expanded manufacturing facility and Intivity Center in June with a two-day Grand Opening celebration. Since that event, farmers from across the Midwest and around the globe have been touring AGCO’s 75,000-square-foot tractor manufacturing line and taking in the exhibits within Intivity Center, the company’s new 17,000-square-foot visitors’ center. More than 2,700 people have toured the Jackson, MN, facility since it opened to the public.

Todd Golly, who owns five Challenger tractors and one RoGator sprayer to operate his family’s 7,000-acre corn and soybean farm near Winnebago, MN, was one of the recent visitors with a group hosted by Ziegler Ag Equipment, a local equipment dealership. Golly came to AGCO Jackson with his business partner and father, Thomas, to watch the manufacturing process as the pair considered adding another Challenger track tractor to their fleet.

Todd Golly was impressed with the high-tech feel of the expanded tractor manufacturing center. “The manufacturing line isn’t like your typical line,” he says. “It is well-lit and organized more like an office than the sort of warehouse-style line I have seen before. Everything that goes into putting one of these machines together, from the actual materials themselves to the way the line is staffed, is really interesting to watch.”

Golly had some specific questions about the features of one of the latest Challenger models and how it would fit into his operation, and the staff members leading the tour were more than willing to answer his questions. “Most plant tours I’ve been on in the past were given by a tour guide, but on this tour we had a product specialist as well,” he explains. “The tour guide and product specialist took our group to the specific place in the plant where the components we asked about were assembled, and went through our questions point by point. That attention to detail set the experience apart.”

“We built this new plant in Jackson because we wanted to give our dealers and their customers the opportunity to see our workmanship,” says Steve Koep, Vice President of Sales, AGCO North America. Koep goes on to say that this straight-line-configured manufacturing line, with its four quality-gate inspection points and high-tech automated quality-control systems, demonstrates to farmers the attention to detail that goes into every product. The line is spacious, and the progress of each tractor is visible on the overhead LCD monitors throughout the process. The assembly team members and customers can read on the screens what is being built, the stage of production it is in, and even for whom the Massey Ferguson or Challenger tractor is being built.

After the manufacturing facility tour, the Gollys and their group spent some time touring Intivity Center, the visitors’ center which offers displays honoring the history of some of AGCO’s brands, such as Massey Ferguson, Challenger, Fendt, RoGator and TerraGator. The displays also provide a glimpse of where the technology in the next generation of machines is headed.

Golly recommends others take the time to see the facility. “It doesn’t matter what type of equipment you own,” Golly says. “If you’re a farmer, or have any kind of passion for agriculture, I think you’d find this interesting. I’ll be back again soon to spend more time in Intivity Center and to see our new Challenger tractor come off the line.”

The public is invited to visit Intivity Center weekdays between 9 a.m. and 4 p.m. Guided tours of the new tractor manufacturing facility are available by appointment only on Monday, Wednesday and Friday, and may be scheduled online at http://jackson.AGCOcorp.com.