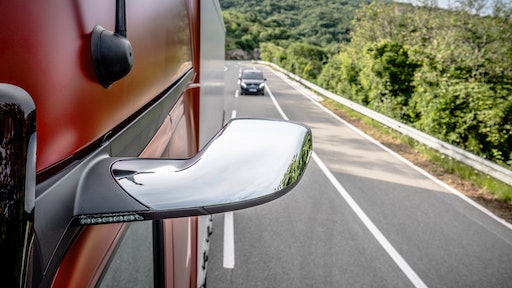 Since the summer, an increasing number of trucks sporting the Mercedes star have been seen on the roads without the typical large exterior mirrors. Instead, small streamlined camera arms are mounted on the roof frame. What's behind this? Since June 2019, Mercedes-Benz Trucks has been supplying the new Actros with the MirrorCam as a standard feature – as the only manufacturer in the industry worldwide to date. The digital rear-view mirror not only looks futuristic; the system can also do much more than conventional main and wide-angle mirrors and its performance far exceeds the legal requirements.

Read more: Can Cameras Replace Mirrors on Trucks? The Trump Administration Thinks So

Patrick Hirth is a cab development mechanic at Mercedes-Benz Trucks and has already driven more than 200,000 kilometres with the new MirrorCam. He says, "After a short familiarisation period, drivers experience the advantages of the MirrorCam in many different situations for themselves. Overtaking, maneeuvering, driving in poor visibility and darkness, cornering and bottleneck situations – the MirrorCam makes all this safer and less stressful."

The MirrorCam consists of two cameras mounted on the left and right of the roof frame, two upright monitors mounted on the A-pillars in the driver's cab and control elements in the door module and in the secondary display. There are also buttons on the passenger side and by the bed to switch on the MirrorCam when the engine is switched off. The images transmitted by the cameras are transferred to the two 15.2-in. monitors with a resolution of 720 x 1920 pixels. Like the conventional mirror system, the monitor image is divided into a main and wide-angle field of vision.

As the MirrorCam cameras are attached to the roof frame and the monitors are located inside the cab, the driver has a much better direct view through the side windows. The view diagonally ahead, which was previously obstructed by the large exterior mirrors of a conventional mirror system in many situations, is now clear. This is particularly advantageous when approaching junctions and roundabouts, when maneuvering and in tight bends.

See more to the rear thanks to wide-angle mode

The MirrorCam also assists the driver when reversing and the display then changes to a special maneuvering view. In particular, reversing around corners is made easier as areas further away from the vehicle are also displayed in the usual size. This view is automatically activated when reverse gear is engaged and is still displayed when driving forwards up to a speed of ten km/h or until it is deactivated with a button.

Better assessment of traffic behind

The distance lines in the display of the MirrorCam are also useful: they help the driver to better gauge the distance to objects behind the vehicle according to the driving situation. In addition, before moving off, the driver can use the door control panel to position one of the lines to symbolise the end of the vehicle in the display. To this end, the driver places an object that is well visible, such as a fluorescent jacket, on the ground next to the end of the trailer and aligns the line accordingly. If the system detects a change in the towed unit such as a trailer or semi-trailer, the driver is alerted by a flashing line that the length of the truck may have changed. However, the system only needs to be realigned if this is actually the case. Later on, when overtaking, MirrorCam displays red, orange and yellow markings to show the driver if they can safely move back to the right lane or if a few meters are still needed for the necessary safe distance.

A special highlight of the MirrorCam is demonstrated when cornering with a semitrailer truck: the image on the display on the inside of the corner also swivels, so the driver always has a perfect view of the end of the trailer when cornering. In contrast, with a conventional mirror system the mirror on the inside of the corner often only shows the side wall of the trailer due to the articulation angle of the semitrailer/tractor combination. Here the driver has a much higher risk of cutting the corner and colliding with an obstacle than when using the MirrorCam.

MirrorCam also proves itself in rain and darkness

The high mounting position of the camera arms not only ensures excellent visibility, it also gets much less dirty in this position than the lower glass mirror. The water-repellent coating of the camera lenses also means less dirt. Furthermore, the view of the screens is free of reflections and dirt on the side windows of the cab.

The camera system is automatically heated when temperatures fall below 15 degrees Celsius, and the brightness can be adjusted separately for the driver and passenger sides. At the touch of a button, the driver can quickly return to the basic setting if the field of vision had previously been adjusted manually for special driving situations. At dusk and at night the cameras with their powerful light have advantages over a conventional rear-view mirror: the system continuously adjusts to the changing light conditions. The same applies to areas with artificial lighting such as a tunnel.

MirrorCam and Sideguard Assist work hand-in-hand in the new Actros and the new Arocs. Sideguard Assist is a warning system that helps the driver prevent dangerous right-turn accidents. The system gives a visual and an acoustic warning in good time if there is a risk of collision with a stationary or moving object in the warning area on the right-hand side of the truck: first, a yellow triangle appears in the display of the MirrorCam on the passenger side, then a red triangle. The driver can then usually brake in time if they have overlooked something on the passenger's side when turning right. This is particularly important in busy city traffic with lots of cyclists, pedestrians and parked cars. What's more: Sideguard Assist also functions as a Lane Change Assist for the right side and warns the driver here with a yellow or red triangle in the MirrorCam monitor if another road user is next to the truck in the right lane.

MirrorCam has a further safety advantage over a conventional mirror system: some drivers unintentionally travel with mirrors that are not optimally adjusted. This can result in a dangerous "blind spot" on the passenger side into which other road users such as cyclists, pedestrians or electric scooters can easily disappear. In some situations even a slight adjustment of the seat position is enough to create a "blind spot" on the passenger's side. This is because with a conventional mirror, the driver's line of vision is always defined by the formula "angle of incidence equals angle of deflection". This "blind spot" problem no longer exists with MirrorCam and Sideguard Assist because the displays always show the same camera image – regardless of the angle from which the driver looks at the monitor. And in case of doubt, Sideguard Assist gives a warning.

Vehicle surroundings can be monitored while the driver rests

The MirrorCam can be switched on for a further two minutes at a time from the driver's cab even when the engine is switched off and after the two-minute shut-off delay for safely leaving the vehicle. There are switches for this in the cab on the passenger side and at the bed. This is a useful function which enhances safety for the driver, as it allows him or her to view the area around the vehicle at any time without being seen. If, for example, the driver hears what might be thieves checking out the tank or the cargo, they can observe them even when the curtain is closed and, if necessary, sound the alarm.

As ever more Actros and Arocs are on the road with MirrorCam, more and more drivers are benefitting from its advantages. For example, Tom Westphal says, "I've already told my boss that I only want to drive trucks with a MirrorCam in future." The driver of the haulage company Wagenstetter from Forsting in Upper Bavaria has gathered positive experience with the system in an endurance test over 100,000 km.

Klaus Wagenstetter, Tom Westphal's boss, is also impressed by the advantages of the MirrorCam: "The fuel consumption of the new Actros on motorways is up to three percent lower than that of its predecessor. MirrorCam has made a significant contribution to this by eliminating mirror housing wind resistance. Furthermore, the many additional functions enhance safety, and safety has always been a top priority at our company."

Quick familiarization with the system

Torsten Reinholz, a driver at the haulage company Böpple, has also used the MirrorCam over more than 100,000 kilometres. His verdict: "I quickly got used to the new MirrorCam in everyday driving. I felt safe with the system right from the start and after a few days I wouldn't have wanted to be without the MirrorCam."

But to date it is Mercedes-Benz Trucks test drivers like Patrick Hirth who have driven the most kilometers with the MirrorCam. "I much prefer driving with the MirrorCam now. The system is quite simply superior to conventional main- and wide-angle mirrors in crucial situations."

Design minimizes the need for repair and enables retrofitting

It should also be mentioned that the camera arms of the MirrorCam can be folded in the direction of travel and against the direction of travel. This minimizes damage in the event of a collision. Due to the smaller size and the high mounting of the MirrorCam system alone, there is much less risk of it catching on something. And the fact that trucks with MirrorCam can be retrofitted with conventional mirrors at pre-defined connection points in the door body structure in the event of a later resale of the vehicle could also be seen as an advantage.