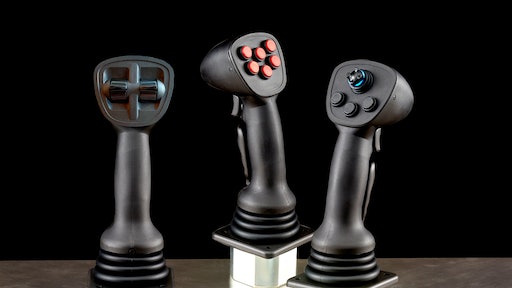 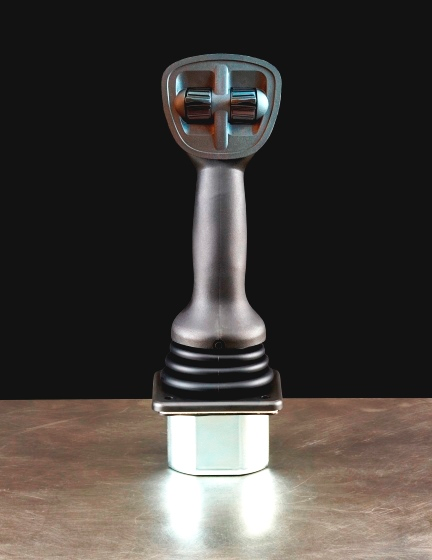 As an additional new offering, the XD series may now also be specified with dual HR series Hall effect thumbwheels. Utilizing proven non-contacting technology, the HR series provides precise linear voltage outputs for over five million lifecycles. In combination with the primary X and Y joystick axis, the XD series can provide up to 4 axis of proportional control. Common applications include telehandler and articulated loaders.

At Agritechnica 2019, Walvoil will introduce its SVM320 joystick which can be customized to specific customer requirements.
Walvoil S.p.A.
October 16, 2019

At bauma 2019, the company introduced joystick steering for wheel loaders which enable the operator to steer accurately and without fatigue.
Liebherr-International Deutschland GmbH
April 25, 2019
Joysticks

Caldaro is one of several organizations around the globe which has signed the 10 principles of the initiative, regarding the areas of respect for human rights, labor conditions, environment and anti-corruption.
Caldaro Inc.
April 15, 2019
Joysticks

The latest addition to the Viper family is ViperXT – a joystick grip allowing up to three analog controls, of which two can be used simultaneously.
Caldaro Inc.
November 26, 2018

Danfoss Power Solutions partnered with a university to conduct a research project to conclusively demonstrate the effectiveness and potential muscle strain of different steering solutions.
July 5, 2018

The JC1210 paddle joystick from Curtiss-Wright's Penny & Giles brand features an additional 10 degrees of travel at both ends of the axis.
Curtiss-Wright Corp.
October 24, 2017

SDLG will begin introducing wheel loaders upgraded with Tier 4 Final engines and other enhancements, such as new joystick controls, in June to the U.S. and Canadian markets.
Shandong Lingong Construction Machinery Co., Ltd. (SDLG)
May 6, 2016

At bauma, SVAB introduced a new platform and configuration tool for its Grip L8 joystick to make it easier for OEMs to customize the joystick to their application needs.
SVAB Hydraulik AB
May 6, 2016
Operator Cab

Curtiss-Wright Displaying Technologies from all Four Divisions at bauma

Curtiss-Wright will display a variety of products from its various brands at bauma 2016, including a new joystick designed for the aerial work platform sector.
Curtiss-Wright Corp.
April 7, 2016

The FG5 multi-function handle from J.R. Merritt can be mounted in left- or right-handed configurations and can include various combinations of buttons, thubwheels and switches.
J.R. Merritt Controls
February 22, 2016

AMAZONE released its AmaPilot+ multi-function joystick which enables a total of 36 functions to be controlled at Agritechnica 2015.
AMAZONEN-Werke (AMAZONE)
December 7, 2015
Follow Us