With the production of its 20,000th NITE unit, Bergstrom has helped its customers save 75.8 million gallons of fuel per year. 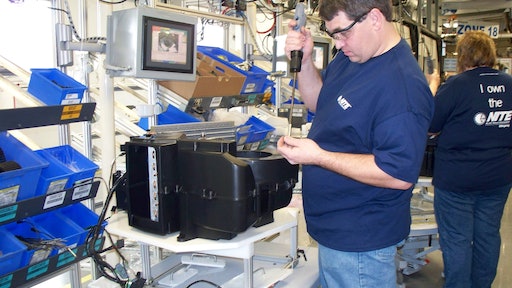 Bergstrom Inc., a global designer and supplier of climate systems to the commercial vehicle industry, celebrated the production of the 20,000th NITE no-idle system – a milestone unmatched in the industry.

The 20,000th unit, produced at Bergstrom’s corporate headquarters in Rockford, Ill., was a NITE
Phoenix system, the newest model in Bergstrom’s popular battery- powered, no-idle systems. In addition to the NITE Phoenix, Bergstrom manufactures the NITE Plus and the NITE Day Cab.

“It was only two years ago that we celebrated the production of our 10,000th unit,” says Bill
Gordon, VP Sales, Aftermarket and NITE. “We have been able to maintain this high level of production because we could count on a competent and dedicated team who put all of their efforts in fabricating a quality product and providing exceptional service to our customers. We are very proud of this achievement as well as our legacy and contributions to reducing harmful emissions and helping improve driver comfort on the road.”

In production since 2004, the NITE no-idle system has helped drivers all across the world remain comfortable while adhering to anti-idling regulation. As a battery-powered system, the NITE solution can reduce the average truck’s fuel usage by as much as 3,790 gallons a year, and save the owner more than $13,396 per truck, per year in reduced fuel costs and maintenance, based on diesel prices of $3.49 per gallon, 6-cylinder engine, 1,000 idling RPM, 8 idling hours per day, 300 days per year.

With the shipment of the 20,000th unit, NITE system users are now saving a total of 75.8 million
gallons of fuel per year. That is equivalent to roughly 1.8 million barrels of fuel, or 8,422 gasoline tanker trucks filled with fuel.

In its seven years of manufacturing the NITE system, Bergstrom has become the undisputed leader in battery-operated systems that are both factory installed and aftermarket units. The company has forged numerous partnerships with other manufacturers to offer innovative and award-winning approaches to no-idling solutions. Most recently it announced that the Webasto Air Top 2000 ST, one of the industry’s most popular auxiliary heaters, has been added to the line of heater options now available with Bergstrom’s family of NITE systems.