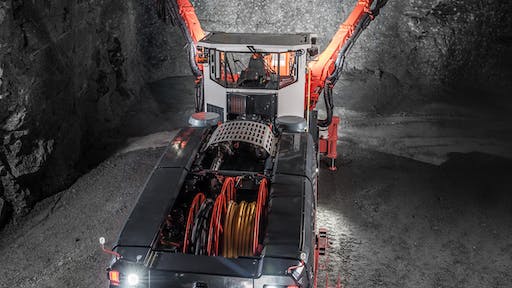 Sandvik Construction is introducing a completely new tunneling jumbo to its extensive offering: the new, fully automated, DT922i tunneling jumbo. This will bring to customers true tunneling quality, reliability and exceptional versatility. With a new articulated carrier, it features a next generation cabin supplying 25% increased visibility, and noise level of less than 69 dB at all times. Intelligent, state-of-the-art control system, and Sandvik’s iSURE excavation management tool, create a combination which will change the future of tunneling.

The DT922i is a fully-automated electro-hydraulic two-boom tunneling jumbo with a completely new articulated carrier. It offers unique intelligence, true power and ultimate versatility to handle any tunneling job that comes along. Designed to improve the tunneling quality through its novel automation and planning function, the DT922i has been developed for excavating cross sections up to 125 m², including face drilling, bolt hole drilling, and long-hole drilling.

“If you want a jumbo that will be able to perform all different tunneling excavation, this is the one for you,” says Tommi Salo, Product Line Manager, Tunneling, Sandvik Construction. “Our aim was to create an all-round jumbo that is high in performance, reliable in use and possesses the same intelligence like our other i-series jumbos, but at the same time is able to offer the customer the flexibility they were after in terms of new carrier and improved automation. Looking at the end result, I think we have succeeded very well.”

Optimized performance with amplified drilling automation, corner stones for the design of the new tunneling jumbo, has resulted from the use of Sandvik Intelligent Control System Architecture (SICA). This is a well-proven and intelligent drilling control system with nine different hole type settings, and three alternative control methods: manual drilling control, feed percussion follow-up and intelligent torque control. The DT922i also possesses a new easy-to-use boom control system with three different modes for manual boom control. With this new technology the accuracy of drilling is brought to a completely new level which facilitates enhanced and maximized performance.

Equipped with the powerful Sandvik RD525 rock drill which provides 17% higher penetration rates, 40% longer tool life for the shank, as well as 17% for the bits (when compared to its predecessors), the DT922i delivers superb performance in any conditions. Its two accurate SB100i booms are equipped with stiff square shape profile giving maximized support to the rock drills and further add to the precision in drilling.

The DT922i’s brand new cabin comes with improved ergonomics and maximized safety. The new design delivers 25% greater visibility sector, reduced dust levels and provides more operator space. With noise levels under 69 dB at all times, it thus supplies a comfortable and safe working environment for the operator. Additionally the new state-of-the-art user interface, with touchscreen, is easy to work displaying comprehensive diagnostics with all drilling and carrier parameters split into logical subsystems and shown on one display.

Environmental, health and safety issues have not been forgotten in the design of the new DT922i. All lights of the new jumbo are based on LED-technology, which when compared to the more commonly used High Intensity Discharge (HID) lights, have up to 500% increased lifetime, and consume 50% less energy. In addition, the laser scanner access detection system optimizes personnel safety. The DT922i is available with the fuel efficient and emissions friendly Tier 3 diesel engine (119 kW) as standard, or the optional Tier 4 Final (122 kW), which provides even greater levels of reduced emissions, with the powerpack consisting of two 75 kW IE3 compliant electric motors. These being just examples of the new jumbo’s EHS-features, which enable the DT922i to be a trailblazer in modern underground drilling, not just from a productivity perspective but also an EHS one.

The new DT922i tunneling jumbo is set to be introduced during the second and third quarters of 2015 at several local customer focused events around the world.

Stoneridge-Orlaco’s new high-definition 7-in. ELED offers a high resolution that delivers razor-sharp images, providing operators with an optimum view of their working environment.
Stoneridge-Orlaco
May 19, 2021
Follow Us