The digital generation of the ProViu 360 camera system increases driver comfort and safety in construction and mining vehicles. 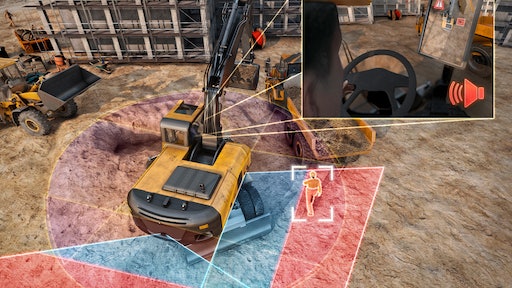 The new digital ProViu 360 camera system gives the driver a
bird’s eye view of his machine. The system can also become intelligent with the next step and will be able to warn of collisions and to support many typical applications of construction vehicles.

Continental sees digitalization and connectivity in construction vehicles as a crucial factor for the future of the industry. The technology company focuses on the human being – the stress level of the driver, for example, must be reduced, and it must be possible for him to handle the flood of information in such a way to maximize efficiency and safety. That’s why Continental is developing digital solutions such as the new ProViu 360 intelligent surround view system. The digital camera system will be one of the highlights in Continental’s bauma 2019 booth from April 8-14 in Munich (Hall C5, Booth 403).

The right information at exactly the right time

“As technical development progresses, construction machine operators are receiving more and more new information – and it’s valuable information too, because it increases efficiency and quality on the construction site,” says Peter Wagner, the Continental segment manager who is responsible for small series and retrofit solutions in the construction machinery sector. “However, it’s the drivers who have to deal with this flood of information, and if we really want the new digital developments to lead to more efficiency and safety, then we have to make it as easy as possible for them by displaying that information in a clear and targeted way.”

As a supplier of complete systems and with a wide portfolio of sensors and camera systems from displays to fully equipped driver workplaces, Continental has the necessary in-house know-how to achieve this – and it’s this know-how that enables the technology company to offer the industry innovative and flexible retrofit solutions at an early stage, and to establish new functions in cooperation with construction machinery manufacturers.

The flexible solution for a panoramic view – the new ProViu 360

The new ProViu 360 camera system has four 1.3-megapixel cameras covering every direction, giving the driver a bird’s eye view of his machine. Compared to its predecessor, this second generation of the camera is completely digital, enabling the system to deliver sharper and higher quality images in HD resolution to a 10 in. HD touch display. Production of the ProViu 360 digital version as a general application for a bird’s-eye view is planned for 2020. Many other special fields of application can also be based on the ProViu 360, such as precise edge control during rolling operations.

The ProViu 360 can also become intelligent with the next step, because valuable additional information like radar data and tire pressure can be fed into the system. In augmented reality, markers, icons or texts can also be placed on the camera image and seen in the display – the sensors can warn of collisions, for example, and this can be shown on the screen in colorful 3D imagery. Accidents with persons and damage to the machines can be prevented thanks to this comprehensive view of the vehicle’s surroundings.

“We deliberately opted for the universal CANbus interface already established in the market, because it allows a wide range of possible applications. Our CAN bus management lets us filter the stream of data and provide only the information that the driver needs,” says Daniel Wappler, Product Manager at Continental. The combination of different sensor data, that ProViu 360 will offer in the future also increases the quality of the information. This is especially true for the fusion of data from camera and radar. Users benefit from Continental’s wide technology portfolio and its extensive expertise in radar sensors, also in the world of construction machinery.

Displays are also among the components Continental uses to contribute to greater efficiency in controlling construction machines. Combining ruggedness with bright imagery that makes the screens easy to read even in strong sunlight, these displays are perfectly tailored to operating conditions on the construction site. For example the flexible and high-quality MultiViu Compact primary instrumentation with 7-in. display and optional touchscreen: An optional built-in Bluetooth module lets the driver retrieve vehicle information like oil or fuel levels easily with his mobile phone and forward the information to the site office. Conversely, the display can also show messages from the smartphone. Two CAN ports, a video input and multiple digital and analog inputs and outputs round off the technical features. Continental also offers the MultiViu Compact with a 4.3-in. display as an entry-level version.

In addition to these compact and cost-effective solutions, Continental also offers premium versions, like the freely programmable MultiViu Professional12 instrument cluster, which boasts a high-resolution, optically bonded 12.3-in. color TFT display, a real-time 2D graphic display and a video display. The MultiViu Professional12 eases the driver’s workload by clearly presenting all the relevant information about his machine as animated text, scales, bar graphs or symbols. This ensures the highest possible levels of efficiency and precision – and this can also be seen in the modular driver’s workplace (mDWP) in which Continental uses the MultiViu Professional12.

The modular driver’s workplace (mDWP) can be as individual as the needs of its users. Highly adaptable to the requirements of construction vehicles, it offers advantages for both driver and manufacturer. One special feature is the combination of up to three displays with two freely configurable control panels, making all the relevant information and the most important control panels easy to see. The driver benefits from this concept because he only sees the information that he really needs for the task at hand, so he’s not unnecessarily distracted and can concentrate on driving and his work processes. Pop-up messages can also be displayed to warn the driver of unusual or hazardous situations. The mDWP increases efficiency, safety and job satisfaction levels.

For the manufacturer, the modular driver’s workplace represents a major step forward in terms of flexibility and individualization. Thanks to its modular design, control panels and displays can be arranged to match the manufacturer’s requirements, allowing the company to focus entirely on the special requirements of its customers. Operator panels are connected via CANbus and are freely programmable, making the system universally usable. Thanks to the robust design of all its components, the mDWP also proves its worth in the tough everyday conditions that prevail on construction sites.

bauma in April (Hall C5, Booth 403) will see Continental showcase these and many other solutions for significantly relieving the strain on drivers.

The Airtronic 3 air heaters are available in four models with 12 possible versions to meet a wide range of vehicle application needs.
Eberspaecher
December 9, 2021
Follow Us