Early pneumatic rollers consisted of each axle holding a full row of identical smooth rubber tires, an odd number on one axle and an even number on the other. 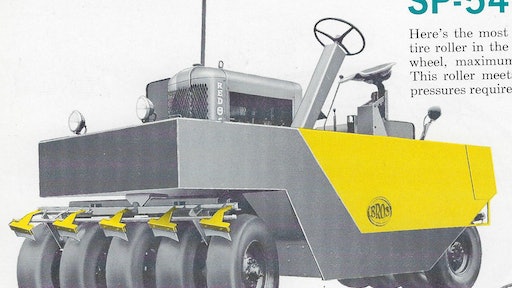 In terms of numbers sold, the Bros SP54B was one of the most popular self-propelled pneumatic rollers. It weighed 6,120 lbs. empty and could be ballasted to 25,000 lbs. It rode on nine 7:50x15 tires.
Bros Inc. sales brochure, HCEA Archives

In the last issue, we looked at the principles behind rollers using static steel drums. This time, we’ll see how pneumatic-tired rollers are used.

A steel-drum roller compacts a swath across the width of the machine, either as a three-wheel roller with a steering drum in front and two driving drums in the back, or a tandem roller with two or three full-width drums. Its compaction force is simply a function of the machine’s weight, the area of contact with the surface (which is greater on a tandem than on a three-wheel roller, giving the latter more compaction force per ton of weight) and the material being compacted.

In contrast, a pneumatic roller compacts by the force applied by two rows of rubber tires.

Introduced in the late 1930s, the first pneumatic rollers were pulled behind tractors. They consisted of a ballast box supported on two axles, one at each end of the machine. In the early 1950s, pneumatic rollers became self-propelled, often by building them upon the powertrains of industrial wheel tractors. Tampo and Shovel Supply, for instance, often used Oliver powertrains for their rollers. While the towed rollers were usually ballasted to no more than 10-12 tons, depending on the material and working speed, self-propelled rollers weighing up to 35 tons were offered.

On both towed and self-propelled machines, each axle held a full row of identical smooth rubber tires, an odd number on one axle and an even number on the other, with a total of nine or 11 wheels being most common. The wheels were arranged so that those on one axle overlapped the treads of those on the other. This produced an effect of massaging and kneading the material between the tires of one axle and then the other, especially in soil. On asphalt roads, the effect was similar to heavy trucks and buses passing across the pavement.

The weight on each tire caused it to penetrate the surface; with the tires so close together and one axle overlapping the other, the areas of penetration and compaction merged across the width of each axle. The result was high compaction pressure per square inch of surface contact. The tires tended to leave tracks in the material being compacted, and so finish rolling with a tandem roller was usually necessary when working on asphalt.

An offshoot of the towed pneumatic roller, the proofroller, was developed in the mid-1940s. A proofroller rode on a single axle with four oversized, high-pressure flotation tires, and it was designed to provide deep-lift compaction of earth fills. The first proofrollers weighed 20 or 30 tons ballasted, but shortly 50 tons became the standard with at least one weighing a whopping 200 tons. Like its smaller cousins, it also tested the material’s load-bearing strength, to ensure compaction was up to spec.

The Historical Construction Equipment Association (HCEA) is a 501(c)3 non-profit organization dedicated to preserving the history of the construction, dredging and surface mining equipment industries. With approximately 4,000 members in 25 countries, its activities include publication of a quarterly educational magazine, Equipment Echoes; operation of National Construction Equipment Museum and archives in Bowling Green, OH; and hosting an annual working exhibition of restored construction equipment. The 2018 show will be August 24-26 at the Le Sueur Pioneer Power Show, Le Sueur, MN, USA. Individual memberships within the USA and Canada are $35 for one year, $65.95 for two years and $99.95 for three years, and $55.00 U.S.  elsewhere. HCEA seeks to develop relationships in the equipment manufacturing industry, and offers a college scholarship for engineering and construction management students. Information is available at www.hcea.net, or by calling 419-352-5616 or e-mailing info@hcea.net.