Development of the leaning wheel helped to increase a grader's ability to excavate and move material in a specific direction. 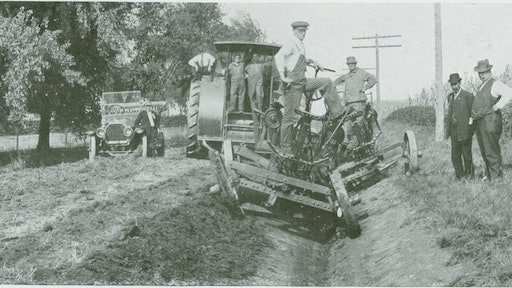 The leaning wheel principle on full display, with two 12-ft. graders forming a ditch in McLean County, IL. The first grader slopes the outside bank and places spoil in the ditch, and the second draws it out to the roadbed while trimming the inside bank.
J. D. Adams & Company General Catalogue No. 14, n.d., HCEA Archives

When encountering a load, the blade of a grader tends to move away from the burden unless steps are taken to counter this simple bit of physics. In 1885, road inspector J. D. Adams developed the most significant such step, the leaning wheel grader.

The leaning wheel, combined with an angled blade, increased the grader's ability to excavate and move material in a specific direction. Adams sales literature explained the principle in the early 1900s:

“In considering the working principle of a grader, it is necessary to realize first that a grader’s work is to move earth sideways and usually uphill. Thus, the load is a side-load.

“(A) man pushing (a) wheelbarrow leans toward and balances his weight against the load, because that is the natural way to move it with the least effort.

“That is the principle on which Adams Graders operate. They have Adjustable Leaning Wheels which the operator can lean in either direction to lean the weight of the grader toward and balance the weight against the side load of earth on the blade – the heavier the load, the more the operator leans the wheels and weight of the machine.”

Along with increasing blade control and capacity by throwing the weight of the grader into the load, leaning wheels also offered another advantage. When ditching, a grader’s rigid wheels could strike the slope opposite the grader; but with this feature the wheels could be set at or nearly perpendicular to eliminate the problem even as the blade worked at an angle into the ditch.

The Little Wonder was the first machine so equipped, and there is no record of a patent. Be that as it may, with this idea the grader became an earthmoving machine, and the idea was so successful that Adams went into business manufacturing and selling graders. His company was acquired by LeTourneau-Westinghouse in 1953, and it continued to use the world-famous Adams brand name until circa 1960.

While leaning wheels were eventually offered by most manufacturers, there was at least one exception. C. D. Edwards Manufacturing eschewed leaning wheels as an unnecessary, expensive and complicated compensation for imbalanced design, and claimed that the perfect balance of their graders held them against the load. Edwards went so far as to say that the perfectly balanced rigid-wheel grader was “the greatest development and stride forward over the adjustable wheel.” Almost a century later, Adams’ principle lives on.

The Historical Construction Equipment Association (HCEA) is a 501(c)3 non-profit organization dedicated to preserving the history of the construction, dredging and surface mining equipment industries. With over 3,800 members in 25 countries, activities include publication of a quarterly educational magazine, Equipment Echoes, from which this article is adapted; operation of National Construction Equipment Museum and archives in Bowling Green, OH; and hosting an annual working exhibition of restored construction equipment. HCEA's 2020 show will be August 28-30 in Concordia, KS. Individual memberships within the USA and Canada are $35 for one year, $65.95 for two years and $99.95 for three years, and $45.00 US elsewhere. HCEA seeks to develop relationships in the equipment manufacturing industry, and offers a college scholarship for engineering and construction management students. Information is available at www.hcea.net, by calling 419-352-5616 or e-mailing info@hcea.net. Please reference Dept. OEM.