Excavation of materials in below-grade situations which were impractical for standard machines brought about development of the Slackline Cableway Excavator. 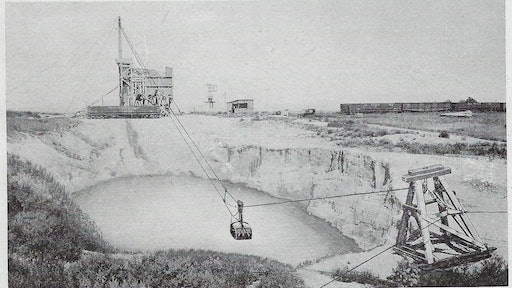 Early in the 20th century, the need existed for efficient excavation of materials in below-grade situations such as under water or in a pit without ease of access where a railroad shovel, the standard excavating machine of the time, was impractical. In 1911, Sauerman Bros. Inc. of Chicago, IL, introduced a solution to the problem – the Slackline Cableway Excavator.

Consisting of a bucket of 1/3 to 3-1/2 cu. yd. (0.25-2.68 cu. m) capacity that traveled on a cableway between a mast and an anchorage or a tail tower, it gained acceptance from contractors, engineers and aggregate producers for four main reasons:

While efficiencies depended on a number of factors, it was at its best working to considerable depths and conveying at least 200 ft. (61 m) to an elevated dumping point. The ideal working range increased with bucket capacity, and maximum effective digging depth was one third the operating span, meaning it could dig far deeper than was ever normally required. Many aggregate producers used it to reach material 80-100 ft. (24.4-30.5 m) under water and lift it 100 ft. above the water’s surface to a hopper at the edge of the pit.

This machine was adapted for straightforward earthmoving in the 1920s as the Power Drag Scraper, which used a more efficient crescent-shaped bucket that was simply pulled along the ground to the dumping point, digging as it went, then withdrawn in like fashion. This in turn led to the development of the Scraper Tower Machine, which was designed for long, continuous cuts and fills such as levees. The head and tail towers were mounted on rails, and the bucket was drawn towards the head tower, where it placed the spoil to form the embankment. When the embankment reached grade the two towers were repositioned for another round of work.

The Historical Construction Equipment Association (HCEA) is a 501(c)3 non-profit organization dedicated to preserving the history of the construction, dredging and surface mining equipment industries. With over 3,800 members in over a dozen countries, activities include publication of a quarterly educational magazine, Equipment Echoes, from which this article is adapted; operation of National Construction Equipment Museum and archives in Bowling Green, OH; and hosting an annual working exhibition of restored construction equipment. The 2020 show will be August 28-30 in Concordia, KS. Individual memberships within the USA and Canada are $35 for one year, $65.95 for two years and $99.95 for three years, and $45.00 U.S. elsewhere. HCEA seeks to develop relationships in the equipment manufacturing industry, and we offer a college scholarship for engineering and construction management students. Information is available at www.hcea.net, by calling 419-352-5616 or e-mailing info@hcea.net. Please reference Dept OEM.

This single, integrated unit has a condenser that provides maximum cooling when needed and saves energy when not.
Red Dot Corporation
May 26, 2022
Follow Us