By the end of 2018, Solaris' electric buses achieved the milestone of over 10 million km traveled since their introduction in 2011. 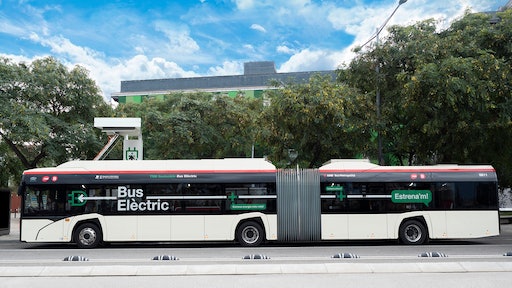 By the end of 2018, the distance covered by electric buses of Solaris exceeded 10 million km. Every kilometer experienced has made it possible, barely a decade after its première, for the Urbino electric, which is now in serial production, to offer the same operational possibilities as diesel buses, without releasing noxious exhaust emissions, and thus remain the most environmentally friendly bus.

Electric buses made by Solaris have already covered a distance of 10 million km in total, since the unveiling of the battery Urbino in 2011. However, the manufacturer’s electromobility adventure actually began when it started working on its first Solaris Trollino trolleybus. The evolution of electric drivelines from trolleybus, through hybrid to solely battery-powered drive, earned the vehicle the acknowledgment of experts from the automotive industry and the Bus of the Year 2017 award.

Until now, Solaris has delivered or received commissions for nearly 400 electric vehicles; in 2017, it ranked first in Europe in this respect, claiming a market share of 18%. A few hundred electric Urbinos are currently riding on roads in 16 states and 38 European cities. The vehicles are doing extremely well, both in the cold of Scandinavia as well as in sunlit Barcelona. A true record-breaker in terms of mileage is the 12-m electric bus in use in Jaworzno, with nearly 250,000 km on its odometer. The pantograph-charged vehicles of the operator sometimes cover up to 12,000 km in one month.

Ever since signing its first contract in 2012, Solaris has been incessantly working on technologies for its electric buses. The company’s product range has widened considerably, with regard to the offered vehicle length, the battery capacity and the charging modes, the driveline types as well as the heating and air-conditioning systems. Moreover, Solaris offers its customers comprehensive investment management services that cover not only the supply of buses and of charging systems, but also ensure the preparation of installations including construction works. Furthermore, engineers from the Office of Research and Development (BBiR) in Solaris have devised a system of remote diagnostics for electric buses, called eSConnect, which will allow to increase the operating and servicing possibilities of the Urbino electric, thanks to the substantial amount of data collected during rides in city traffic.

Even though the electric drive technology itself is already well-known, for many cities and public transport operators it is still a novel and advanced solution. In its attempt to help customers prepare for the electrification of municipal transport, Solaris offers to carry out individual feasibility studies, at the client’s request. Such an analysis allows to find optimal solutions with regard to vehicle infrastructure and equipment for a given urban centre and for particular bus lines. Needs may differ immensely, depending on the outside temperature of the city, but also on the average speed, the number of stops on the bus route, the bus occupancy or the topography of the area. There is one goal though: the bus should be operational whenever the client needs it to be.

Experience gathered during the travels of each Urbino electric has allowed the firm to devise a serially produced bus that is able to replace a diesel vehicle in urban traffic. These are also the laws of the market in which vehicles with alternative drivelines claim an increasing share, and this applies in particular to city buses. Expert forecasts indicate that, in 2030, electric drivelines will be featured in nearly half of all new buses in Europe, whereas diesel engines will be installed in merely 7%.

These latest CWTIs offer an efficient design for use in hybrid and pure-electric applications for on-highway and off-highway commercial vehicles.
Curtiss-Wright Corp.
July 7, 2022
Follow Us