IDTechEx's new report provides a 20-year outlook for the electric truck market which is forecast to continue growing to reduce global emissions. 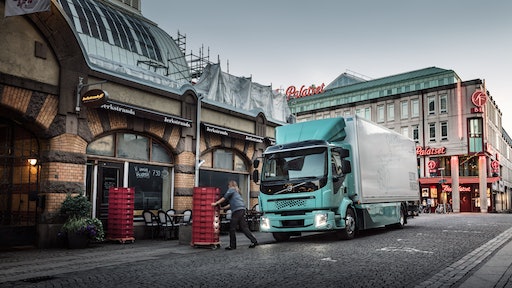 Volvo Trucks is one of the many OEMs researching and developing electric truck technology.
Volvo Group

In June 2020, the California Air Resources Board adopted new standards which mandate that 75% of new Class 4-8 ridged truck and 55% of new tractor truck sales must be zero-emission by 2035. With 11.6% of the U.S. truck fleet (1.7 million trucks) in California, this legislation will be a significant driver not only for the Californian electric medium and heavy-duty truck (M&HDT) market, but act as a catalyst for the US, whilst setting a benchmark for the rest of the world.

IDTechEx believes it is increasingly self-evident that the future of the industry cannot rely on the deployment of traditional combustion engines. Drastic emissions reductions are required from the transport sector, both to protect the global climate and to improve urban air quality. Battery electric (BEV) and fuel cell electric vehicle (FCEV) trucks offer OEMs the avenue to an ultra-low on-road emission future.

In recognition of the tightening legislative landscape for exhaust emissions and growing demand for cleaner transport technologies, truck OEMs are now investing heavily in electric drivetrain programs. For example, Daimler has set a target for 2039 of tank-to-wheel CO2 neutrality for all new vehicles it sells in the U.S., European, and Japanese markets. To meet this aim, it is developing electric trucks (eTrucks) at a range of sizes, from a 7.5 tonne eCanter to a 40 tonne Freightliner eCascadia. The company has also been conducting real-world trials of the technology with partners around the world. Likewise, MAN, Scania, Volvo, Renault, IVECO, DAF, Paccar and Navistar are all conducting eTruck trials, with several models in limited production.

Much of the eTruck press has been reserved for Tesla, which, in April 2020, once again delayed production of its much-anticipated Tesla Semi long-haul truck, this time until 2021 (2 years behind the original schedule). But, if Tesla can deliver the vehicle with the 500-mile range and at the price of $150,000, as it suggests, then it has the potential to significantly disrupt the industry, as the total cost of ownership would make it highly competitive with existing diesel models. It has taken over 2,000 pre-orders, with companies such as PepsiCo, UPS and Walmart keen to test the vehicle as part of their distribution fleets.

China leads the way in eTruck deployment. Government support for the country’s electric vehicle industry drove a well reported boom in electric buses. This experience has given China a significant advantage in volume production of heavy-duty electric vehicles. Chinese OEMs are increasingly looking to leverage their experience in heavy-duty EV in markets outside of China.

Several OEMs, including Toyota, Hyundai, and Nikola, have chosen to focus their efforts on FCEVs. Despite issues with the inefficiency of hydrogen as a transport fuel, FCEV remains in the conversation for long haul applications (where the daily range requirement is difficult for BEVs), though the viability of FCEV trucks is dependent on the yet to be realized production of cheap green hydrogen. Nikola, despite championing FCEV HDTs, is set to launch a BEV HDT well ahead of its FCEV. Could this be an indicative sign for all FCEV M&HDT players?

IDTechEx’s report “Electric Truck Markets 2021-2041”, is intended to help businesses across the value chain plan for the future in this changing market. Providing detail about industry efforts to commercialize zero-emission trucks; background to electric truck technologies, including fuel cells and electric hybridization; and discussion of key enabling technologies for electric truck deployment such as batteries, motors and charging infrastructure.