Volvo and other partners in the ElectriCity project will expand electric bus operations, as well as expand the demonstration area to include heavy vehicles and emission-free urban traffic. 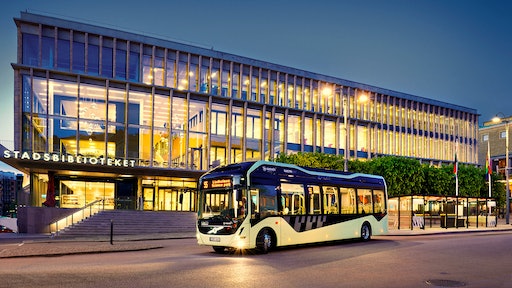 After 2 successful years with electric buses on route 55 in Gothenburg, Sweden, the partners in the ElectriCity venture have decided to expand electric bus operations in the city. In June next year two electrically powered high-capacity buses will start operating on route 16. At the same time, plans are under way to expand the demo arena with heavy vehicles for quiet and emission-free urban traffic.

“Gothenburg has a strong automotive industry and is the Nordic region’s logistics hub. One benefit is that we get involved early in testing next-generation technology. That’s exciting and we learn more together with our partners in ElectriCity than we would do alone. We take these lessons with us in our urban planning as Gothenburg grows into an attractive large city. Tomorrow’s quiet vehicles emitting no exhaust gases will make the city even more appealing for people to live in, work in and enjoy. I’m happy and proud that our cooperative venture has been so successful that we now want to go further in the next phase,” says Stefan Eglinger, Director of Urban Transport Administration, City of Gothenburg.

ElectriCity has brought together companies, researchers, public authorities, the city and the region since 2013 to test and develop new solutions for sustainable transport and sustainable urban development. The most noticeable result is bus route 55 where 10 all-electric or partially electrified buses have been operating since 2015. According to the original plan the tests were scheduled to end in 2018, but now the trial is being extended with additional vehicles and the test period will continue to 2020.

When the Volvo Ocean Race comes to Gothenburg in June 2018, two electrically powered articulated buses will showcase the latest developments as they operate between Nordstan and Frihamnen. These two prototype buses will then run on route 16, which will be equipped with charging infrastructure and bus stop facilities for electrified high-capacity traffic. Among much else, new charging stations will be built at Eriksbergstorget and Sahlgrenska Hospital.

“Electrification is on the march within the global transport sector, and the next challenge is to integrate electrification with investments in future smart and sustainable cities. This is why we need to demonstrate electrifyed articulated buses and other heavy vehicles in the city environment. With this project Sweden can lead these developments and at the same time take a major step forward for a fossil free Swedish transport sector,” says The Swedish Energy Agency's Director General, Erik Brandsma.

Within the framework of ElectriCity work will also commence on testing solutions in automation, such as automatic Bus Stop Docking and bus platooning whereby buses run close behind one other in long trains in urban traffic.

“Changes to the transport sector are essential if we are to create a sustainable society and next-generation cities. We need to implement sustainable transportation of both people and goods in our cities. That’s why it feels particularly gratifying that we are now expanding the ElectriCity demo arena and beginning to examine solutions for automation that can help make electrified vehicles even more efficient,” says Niklas Gustafsson, Chief Sustainability Officer for Volvo Group.

ElectriCity Takes to the Water with Volvo Penta