The prototype vehicle is a Mack Pinnacle DayCab model equipped with a proprietary plug-in hybrid electric driveline, which saves fuel and reduces emissions when running in hybrid or in electric mode. 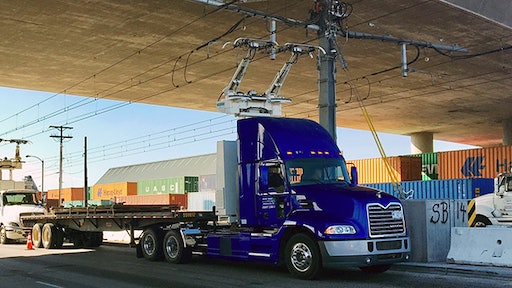 “Mack was pleased to participate in the catenary demo,” says Jonathan Randall, Mack Senior Vice President of North American Sales. “Mack continuously investigates alternative solutions to diesel, and the catenary system is just one of a number of projects in which we are currently involved.”

Siemens installed the eHighway infrastructure, which covers one mile of select lanes of a highway with a catenary system similar to those used to power trolleys or streetcars.

The Mack prototype used in the November demonstrations is a Mack Pinnacle DayCab model equipped with a proprietary plug-in hybrid electric driveline, which saves fuel and reduces emissions when running in hybrid or in electric mode. The Mack truck can connect to the overhead contact lines and transfer energy to the truck’s electric driveline thanks to a current collector supplied by Siemens, allowing it to operate with zero tailpipe emissions on the eHighway corridor.

Mack has investigated several other solutions for reducing greenhouse gas and criteria pollutant emissions including a plug-in hybrid electric powertrain and the use of alternative fuels such as dimethyl ether (DME).