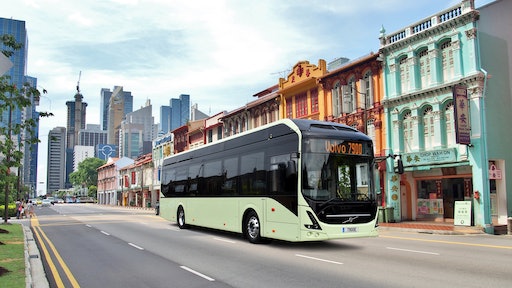 ABB is again underlining its leading role in sustainable global transport solutions with a new project together with Volvo Buses, this time for Nanyang Technological University (NTU) in Singapore: ABB will provide its state-of-the-art Heavy Vehicle Chargers (HVC) 300P for the forthcoming project to deliver two autonomous driving electric buses for the island by the beginning of 2019.

With this project ABB is taking another step towards sustainable mobility, just days after announcing the title sponsorship of the world’s first fully electric, international FIA motorsport series.

The HVC 300P fast charging system delivers 300 kW DC power and will recharge a battery in three to six minutes. It is based on OppCharge, an open interface for DC electric bus charging, which is now being used in Singapore and Asia Pacific. Using a pantograph mounted on the infrastructure for end-point charging, it allows buses to be charged at the end of the line, without impacting on the normal operation of the route.

As Håkan Agnevall, President of Volvo Buses, explains, “We are seeing fast growing interest in both autonomous and electric vehicles in cities all over the world. Together with NTU, one of the world’s leading universities of technology, ABB and SMRT – Singapore’s premier multi-modal land transport provider – we now have the possibility to test various solutions under realistic conditions in a major city that has high ambitions for its public transport.”

One of the autonomous electric buses will be used at the Centre of Excellence for Testing and Research of Autonomous Vehicles (CETRAN) – Singapore’s advanced new test facility – where researchers will test new functions and study how the bus interacts with other road-users. The second bus will be used for tests in the bus depot, in partnership with SMRT. The aim of the project is to enable tomorrow’s autonomous buses to charge their batteries, drive to the vehicle wash and park – entirely autonomously.

Nanyang Technological University estimates that electric vehicles could make up as much as 50% of Singapore's motor population by 2050 and we are proud to be helping make this vision become a reality.

Tarak Mehta, President of ABB’s Electrification Products division says, “ABB has long been at the forefront of developing greener solutions. With this project, we reaffirm our intent to develop the Electric Vehicle industry in the Asia Pacific region. Our high-quality electric charging systems, combined with our cloud-based connected platform ABB Ability™, are paving the way for vehicles to become cleaner, more efficient and cost effective than ever before.”

ABB is due to deliver the first of two HVC 300P fast chargers towards the end of 2018, when the cooperative venture between Volvo Buses and NTU gets underway. The autonomous electric buses will be delivered in early 2019. So far ABB has sold more than 6,000 cloud connected DC fast-chargers around the world for passenger cars and commercial vehicles. ABB has now also teamed up with Formula E – the world’s first fully electric international FIA motorsport series as part of its continuous drive to promote sustainable mobility.