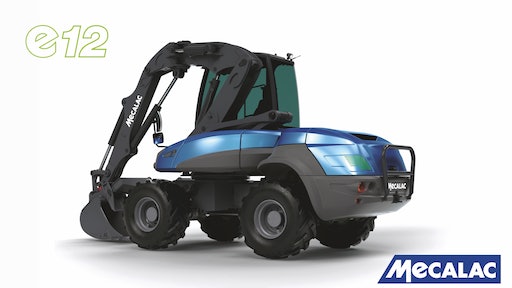 For a very long time now, Mecalac has been thinking about the environment and sustainable development as an investment and a key issue for the future, rather than as an expense, even in the field of internal combustion engines. The group’s R&D policy is focused on designing engines with the smallest possible environmental impact, both on building sites and on local residents.

Energy Transition Award of Intermat 2018 for the e12

At the Pre-Intermat international press conference held on January 18, 2018, the new Mecalac e12 received the Energy Transition Award. An award that recognizes, on the one hand, its technological and environmental performance and, on the other, the iconic “made by Mecalac” design in ongoing evolution of the 12 MTX which embodies the spirit of this company based in the French Alps: constantly questioning its own assumptions in the endeavor to meet the needs of future construction projects and to create innovative new solutions based on existing concepts.

In 2018, Mecalac is offering the first 100%-electric machine, which meets the three key requirements for the urban building sites of today and tomorrow: range, performance and compactness. It is a technological response inspired by the constantly evolving people, terrain and possibilities of urban building sites. With the e12, Mecalac is entering a new chapter of its history, by making available an electric excavator. This landmark is being recognised by the range being the first to be allocated the letter “e”: “e” for electric, “e” for ecosystem, “e” for emits nothing and “e” for emblematic.

The e12 is the logical conclusion of an approach that has been making building sites the best they can be since 1974, with ever-more versatile machines that reduce the number of engines on site, renders operating them as time-efficient as possible and makes them profitable to run.

The electric version of the 12MTX fits perfectly within Mecalac’s philosophy of moving towards urban building sites that are ever-more compact, high-performance and environmentally friendly. The architecture of the internal combustion version of the 12 MTX makes it the natural forerunner of the electric version, so the  housing for an internal combustion engine now incorporates  LiFePO4 battery technology — iron and phosphate for three times as many charge cycles — that marry a service life considerably better than classic batteries with complete safety: no risk of fires and no risk of battery fluid leaks.

“Any electric engine must meet to three major challenges: range, performance and compactness. The Mecalac e12 is the first 100%-electric excavator that does not compromise on any of those three criteria. The key to our machine’s range and performance is in its very architecture. The power source — which is separate from the upper structure — means we can install a record capacity of 146 kWh, which results in an unrivalled range of 8 hours,” explains Patrick Brehmer, Head of Design and Product Management.

With a structure designed for the city from the outset and two independently operating electric motors, one powering the excavation mechanism and one for movement, the MECALAC e12 is destined to become a fixture in plant fleets for urban settings. Apart from its performance and range, its 100% electric transmission offers unrivalled tractive force as soon as the engine is started, with brake energy regeneration. The electric motors’ incredible power density make it possible to keep it extremely compact; they also require no maintenance. What is more, the e12 has a charging station that can be used to recharge it on site in six to seven hours. As you can see, without compromising on power, the e12 can work all day without needing to recharge its batteries: a range of eight hours at the highest power output.

With the MECALAC e12, less really is more

The e12 works all day, racking up more time in action than it does standing around every day. Its articulated chassis means it can move easily around any site, and this agility also plays a role in its overall performance.

With diesels to be banned in major conurbations already announced and fixed, and with increasingly dense urban development and the cramped spaces that go hand-in-hand with that, the new Mecalac e12’s perfect blend of architecture and technology is paving the way for safer, cleaner and more efficient urban building sites.